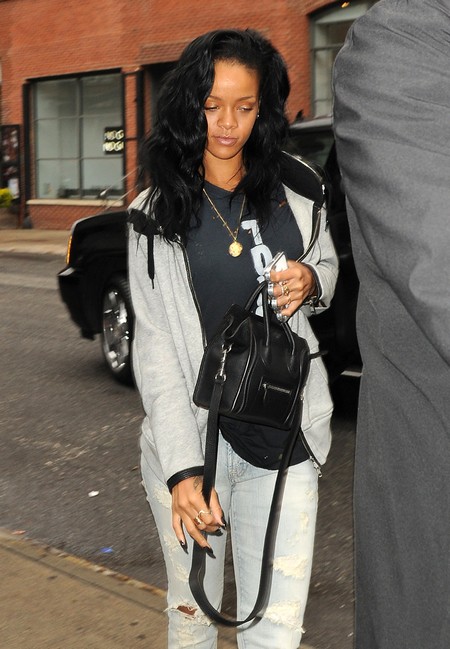 Rihanna responded to being called a ‘bitch’ and a ‘slut’ by Chris Brown by unfollowing (dropping) him from Twitter.  Just a short time later Chris reciprocated by dropping Rihanna!  Wonderful – let’s hope the two feuding celebs keep things this way.

What happened was that Chris had some nasty things to say about Rihanna – at least Rihanna thinks they are about her – in his new remix of Kanye’s TheraFlu.   As TMZ reports the offensive lines are “Don’t f*ck with my old bitches … like a bad fur … every industry n*gga done had her,” followed by “Trick or treat like a pumpkin … just to smash her.”

It seems Rihanna has finally had enough of Chris Brown … the singer has “unfollowed” her ex-boyfriend on Twitter after he released a new diss track that appears to be aimed at her.

The song in question is a remix of Kanye’s TheraFlu — in which Brown freestyles the verse, “Don’t f*ck with my old bitches … like a bad fur … every industry n*gga done had her.”

He continues, “Trick or treat like a pumpkin … just to smash her.”

Hours after Brown released the track last night, Rihanna stopped following Brown on Twitter — a HUGE move — and one that’s leading many to assume Rihanna believes the verse is about her.

We reached out to Rihanna’s rep — so far, no comment.

Could Chris have been referring to his former darling Rihanna?  Sure looks like it.  Let us know what you think in the comments below.