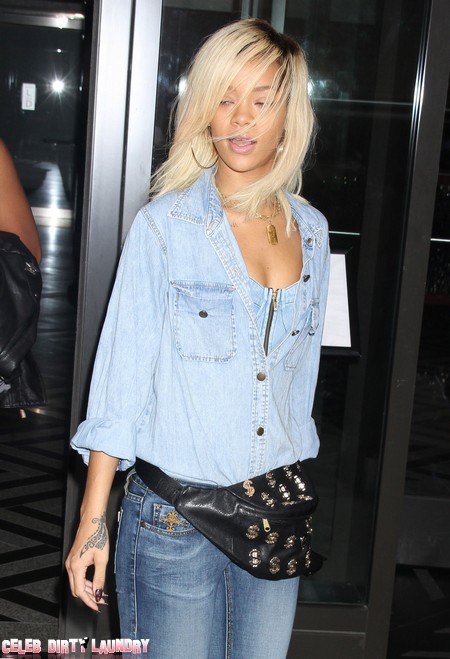 Rihanna has been getting a lot of negative attention lately—mostly due to her suspicious relationship with ex-boyfriend Chris Brown. But today, people were focusing on the 24- year-old Barbadian beauty for another reason: her increasingly frail figure. Rihanna is trying to stop rumors that she has an eating disorder by telling Ryan Seacrest that she can’t seem to stop losing weight and is frustrated over the loss of her bum.

Rihanna, who is known for showing off her body in tiny bikini’s and risqué outfits, was recently photographed looking frighteningly thin with her hipbones protruding above the waist of her low-rise jeans. But the singer, who is the face of Armani, said on “On Air With Ryan Seacrest” that the recent weight loss isn’t intentional. In fact, the star— who was previously on the Five Factor Diet—claims she can’t stop losing weight.

“The Five Factor Diet has gone straight out the window ever since I went on tour,” she said, “I mean, It’s difficult to have any kind of routine when your schedule is that crazy. So I really have no idea how I’m continuously losing weight,” she told Seacrest, adding, “It’s actually pretty annoying. Now, I don’t have a butt, no boobs — already had no boobs — so annoying!”

Yes, that is annoying! To lose so much weight mysteriously and then publically complains about it. But then she had to go and say this: ““People think I’m not eating. I’m eating McDonalds at 3 a.m . . . it’s an issue. I’m eating ice cream!”

Ohhh ice cream! McDonalds! And still losing weight? Personally, I think Rhi Rhi ought go get checked for tapeworms. You never know what she could have picked up from Chris Brown…

Whatever is going on with her, it probably doesn’t help that her father, Ronald Fenty, recently told Heat Magazine that he was proud of her for shedding the fat she was sporting in October:

“When I saw her this time, I thought she was back to her normal size. I used to joke with her, ‘Robyn, you’re getting too fat!’ But I think she’s fine, I think she looked excellent, as everyone saw, at the Grammys. ‘She’s dieting, she’s working out.'”

MORE: Rihanna On Weight Loss – ‘I have No Butt I Have No Boobs’

This isn’t the first time that Rihanna has openly aired her body image issues and weight loss woes. The singer angered fans and critics in July 2011 when she inferred on Twitter that she had starved herself for an Esquire photo shoot: “RihannaNavy I shot my first cover for Esquire yesterday with Russell James #rockstars*** Not much preparation for that besides wax+starve!!’

Has Rihanna gone back to her old ways? Is it possible the Armani job is putting too much pressure on her body image?

I don’t know about you, but all I’m hoping Rihanna and her bum will be reunited soon! It’s just not a duty wine without it!