Rob Kardashian Arrested For Terrorizing And Chasing A Photographer (Video) 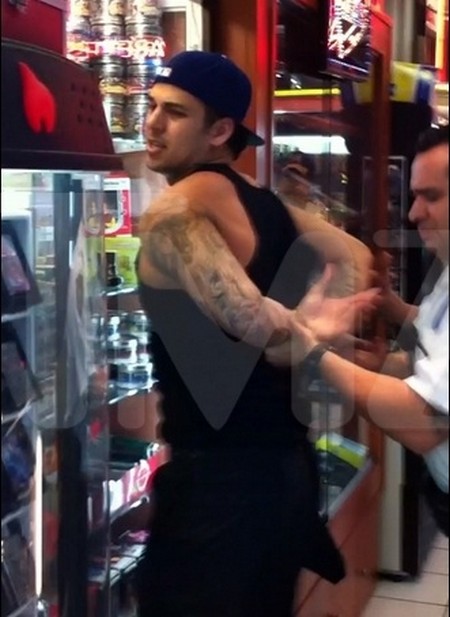 Rob Kardashian decided he would act the tough guy (LOL) and wound up bullying a photographer and getting arrested early Sunday.  Sweet deal indeed – but sadly the cops released the bully.

It seems Rob was out with pals when he spotted a photographer taking pictures from across the street.  The Kardashian decided to threaten the poor dude and gave chase.  The photog freaked and ran away screaming for help.  Police saw the whole thing and arrested the goof – we mean Rob of course.

TMZ Exclusive: Rob Kardashian tried joking around with a paparazzo in Miami early Sunday morning … and he ended up handcuffed and nearly arrested as a result … TMZ has learned.

Sources close to Rob tell TMZ he was out with some friends when he saw a photog taking pictures from across the street. We’re told Rob thought it would be funny to start sprinting towards the photog … but the photog didn’t laugh and instead ran away screaming for help.

According to our sources, Rob followed the guy into a smoke shop to try and clear the air (no pun intended) but the police saw the whole thing and decided to get involved (see video below).

We’re told cops interviewed both Rob and the photog — even putting Rob in the back of a police car. But after Rob explained to them it was all a misunderstanding, he was released.

And that’s why you never chase after strangers

The Kardashians sure manage to stay in the news…