Rob Kardashian Gets Botox to Fix His Drooping Face! 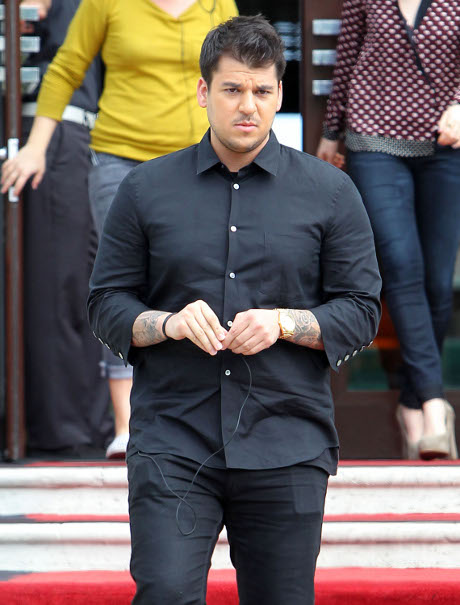 After a bout of feeling uncomfortable in his own skin, Rob Kardashian has decided to follow in the footsteps of his sisters and call upon the good ol’ plastic surgeon for a few improvements. Apparently, Rob feels as if he’s rapidly aging and starting to look older than he should — but nothing a little Botox can’t fix, suggests older sister Kim Kardashian, who’s had too many things done to count. Rob didn’t like the idea of a drooping man-face, so he supposedly took Kim Kardashian’s advice and filled his face with that magical juice that puffs, de-wrinkles, and hardens the skin in unnatural ways. Unnatural or not, according to an insider Rob walked out of the surgeon’s office feeling like Hercules, more confident than ever!

“Rob was complaining about his face drooping and that he’s starting to look old,” a source tells National Enquirer (via Radar). “She turned him on to her trusted plastic surgeon and convinced him to go for a Botox treatment. Rob was all for it and made an appointment right away.”

Vanity runs in the Kardashian blood, true. But if his sisters celebrate plastic surgery, I don’t see why our friend Rob can’t inject some de-wrinkle juice into his E!-worthy cheeks? Am I right? There are far worse things that Rob could be doing to his body than filling it with Botox.

Plastic surgery is such a touchy subject in Hollywood, and some stars choose to keep their procedures on the down low whereas others are very forthcoming about the work they’ve had done. If everyone in Hollywood just spoke openly about surgeries, then I think there would be a lot less *gasp* and *Oh My!* whenever it’s brought up. It’s the fact that people hide it, and treat it as if it’s something to be ashamed of, and then lie about it, that it’s placed in such a negative light.

What are your thoughts on celebrity plastic surgery and undercover procedures. If this little plastic surgery endeavor is true, then I doubt Rob Kardashian will comment on his adventure through nip/tuck land (I guess there wasn’t any “tucking,” just some “puncturing”).