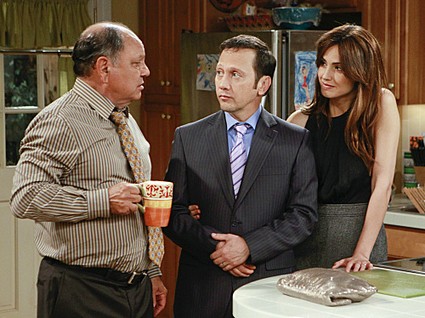 Last week was the premiere of the new show Rob and I was not expecting much because the reviews were not great but I have to say I was pleasantly surprised.  The show is a comedy and stars Rob Schneider as a lifelong bachelor who just married into a tight-knit Mexican-American family. Rob is a successful landscape architect who, after a whirlwind romance, marries Maggie (Claudia Bassols), a beautiful, smart fashion boutique owner, who is way out of his league.  We recapped the show here if you missed it.

Part of the success of the new show is Rob Schneider is very funny and the supporting cast is very likable.  Who does not like Cheech Marin?  The whole show has an everyman quality for those who just want to kick back and relax in front of the television.

Will you be tuning in tonight?  We will!  Stay tuned as we will be covering the show with all the up-to-the-minute details tonight at 8:30 PM EST, so don’t forget to bookmark this spot and watch the show with us.   Refresh often to get the newest updates.

RECAP: Rob is all dressed for a wedding, not his – he already married Maggie. They are running late and Maggie tells him to relax because Mexican wedding always run late.

The wedding is over and Rob comments on ho fantastic it was, although it lasted 20 hours. Rosa gives Rob and Maggie a hard time, she feels that they should have had a proper wedding. Fernando tells Rob that he stole his dance with his daughter at her wedding from him. Hector suggests that they have a real wedding, this time with the whole family. Fernando keeps wondering why Hector is still in the house, he was only supposed to stay three days!

Rob starts to give this whole wedding thing a lot of thought and thinks they should do it. Maggie is surprised, but Rob tells her that if they do it, maybe her family will finally like him. Maggie admits that she always wanted a fairytale wedding. Rob proposed to Maggie again and she says yes.

The next day, Rob and Maggie announce to her family that have agreed to have a second wedding. Hector agrees to be Rob’s best man, even though he didn’t ask him. Hector tells him he is going to organize the bachelor party with wine and women. Fernando is so happy, the family makes a toast to celebrate, then Fernando calls Rob into the kitchen for a special tequila.

Fernando tells Rob to call off the wedding, the money he was supposed to put aside, he gambled it away because she was 30 and he though she would never get married. Rob tells Fernando that he was doing it so that the family would like him. Fernando tells him that if he doesn’t call it off, if he thinks the family doesn’t like him now, it is going to be worse.

Later that night, Maggie is planning the wedding and Rob tries to discreetly back out. He tells her that their wedding already meant a lot, it’s like their whole life started that night, it was crazy and spontaneous. Maggie agrees, the first wedding was the best and no need for another one.

They go over to Maggie’s parent’s house, she has already planned the location and has the place cards all set up on the coffee table. Hector tells Rob that he invited everyone on his phone to his bachelor party and a lot of them have already paid the $50.00 admission fee. It is a surprise party, Hector tells him that sometimes between now and the wedding he is going to kidnap him and take him to a secret location.

Maggie told her mom the wedding is off, Maggie calls him into the kitchen for a word in private. Maggie tells him that she only has one child and not to take this special day away from her. Rob tells her that he cannot reveal his deep dark secrets as to why he cannot go ahead with another wedding. Maggie asks him if he is afraid of her and tells him that he doesn’t want to have her as an enemy.

Rob is alone with Fernando and tells him what Maggie did. Fernando threatens Rob again and walks away only to have Hector ask him how kinky he is on a scale of 1 to 10 and Rob answers 1, afraid of what Hector will do at the Bachelor party.
Rob confides in Hector, tells him the whole story about Rosa wanting the wedding and Fernando not wanting the wedding. Hector tells him to tell the truth and then drop out the window.

Rob is completely confused, Maggie calls him a crazy person. Rob tells her that he wants everyone to be happy, he tells the truth to Maggie and both parents start to freak out. Hector tells Rob, quick jump out the window.
Maggie tells Rob that she loved their wedding but if her parents want a wedding, then they will give them a wedding. They all climb into the car and go to a drive in chapel.

Maggie and Rob are back home and heading to the bedroom when the doorbell rings and Hector kid naps him, surprise!