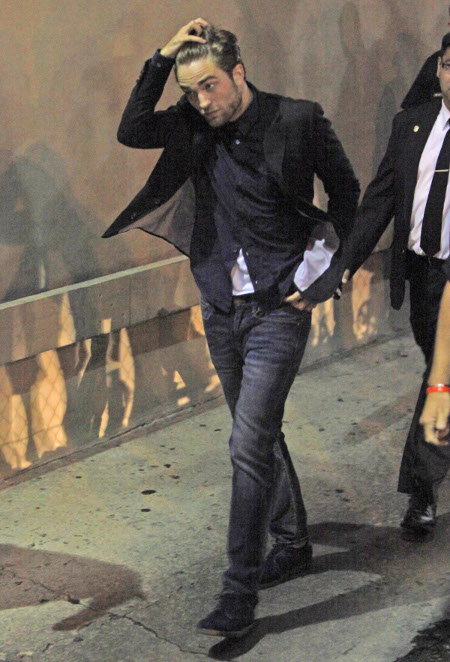 Robert Pattinson turned up last night on Jimmy Kimmel to promote his latest film, Cosmopolis. He was all smiles and laughs, not showing any signs of the recent drama he’s been going through since his ex-girlfriend Kristen Stewart cheated on him with Rupert Sanders.

“I used to turn up at this parking lot lookin’ at everyone like, ‘Why are all these guys sittin’ around in their cars all the time?’ And I’m goin’ there everyday kinda thinkin’ nothing of it, coming out in my little Lycra pants, and one day there was a big raid,” he said.

He also told Kimmel that he is currently homeless, having just rented a small place in which he “just lives behind.” It’s not surprising he’s renting at all, him and KStew have both abandoned the home in which they shared together.

In addition to his personal life (or lack there of), Rob did chitchat about his upcoming flick, Cosmopolis – especially one scene in particular in which his character has sex in his limo.

“Someone was telling me about this vein that comes out of my forehead that only ever happens when very good things happen or very, very bad things,” Pattinson said.

I like it a lot! Good to know . . . . Very good to know. Take a look at one of the segments from last night’s episode . . . Robert Pattinson on Jimmy Kimmel Live!