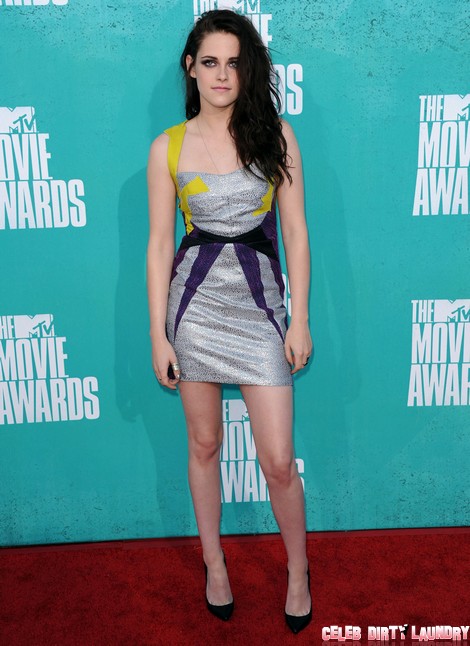 I have to think that Robert Pattinson is absolutely dreading this year’s MTV Video Music Awards.  On September 9th he is scheduled to come face to face with shamed ex-girlfriend, Kristen Stewart.  Both stars have been signed to appear at the Awards and it will be the very first time they’ll be in public together since it was revealed that Kristen prefers home wrecking to sparkly vampires.

The former lovers were scheduled to jointly present an award at the yearly event, but the chance of Robert wanting to share the same breathing space as Kristen isn’t looking so hot, says an MTV source.

“This event could be a real embarrassment. The idea was for them to jointly present awards but that is looking unlikely now.  If they go up on stage at the same time fans will believe they are united again. If Kristen goes up alone the crowd reaction will be astonishing.  Fans have bought into the romance on and off screen so she could be in for a horrible night.”

I suspect it’s going to be a horrid night for Kristen.  Facing the man she made a fool of and all of the heartsick Twihards that believed she and Rob would last forever is likely to be disastrous.  I wonder what her career is going to look like in a year.  Yesterday it was announced that she has been dropped from the sequel to Snow White and the Huntsman.  It looks like for once in Hollywood we are actually watching a formerly obnoxious and entitled actress quickly reap exactly what she has sown.

What do you think will happen at the VMA’s?  Will their be any sort of confrontation or just pure embarrassment?  Tell us your thoughts in the comments below!