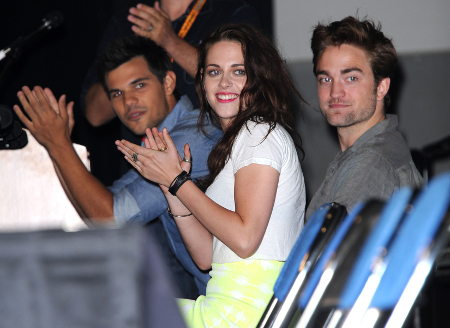 Well, it seems like Robert Pattinson and Kristen Stewart are finally ready to wash their hands clean of the Twilight franchise because we just heard word that both Rob and Kristen have cancelled their plans to appear at the final four Twilight conventions, the biggest events around the nation that will be celebrating the impending release of Breaking Dawn Part 2.

Honestly, after the horrible Kristen Stewart Rupert Sanders affair, we’re not surprised to learn that they will be ditching their fans, but we were a little shocked to learn that mopey werewolf Taylor Lautner has decided to flake out as well. Come on, Taylor. What do you have going on? K-Stew and R-Pattz may have a very tiny excuse for skipping out on their fans, but what’s yours?

As reported by E!, the four conventions where Twihards will be crying their eyes out because the stars won’t be showing up are set to take place in San Antonio (August 25); Detroit (September 29); Parsippany, New Jersey (October 5); and Los Angeles (November 3). If we were a Twihard-fang-lover scheduled to go to one of these conferences, only to hear that the stars ditched us, well, we’d be completely crushed. Just saying.

However, Creation Entertainment, the company in charge of running the conventions, are trying to smooth everything over. They recently released this statement in attempt to console pissed of Twilight fans:

“The passion and dedication of Twilight fandom has been amazing and we’re out to throw one last giant convention, a final gathering to see old friends that have made up the Twilight family. Although Rob, Kristen and Taylor will not be with us this time out we will have a super lineup of other Twilight stars and the weekend will be filled with special events, movie prop and costume displays, contests, panels, auctions, parties, exclusive merchandise, music and much more, including some surprises!”

What do you think about K-Stew and Rob’s latest move? Think their reasons for ditching all their Twihard Loves are legit? Or do you think they’re just afraid to stand beside each other?