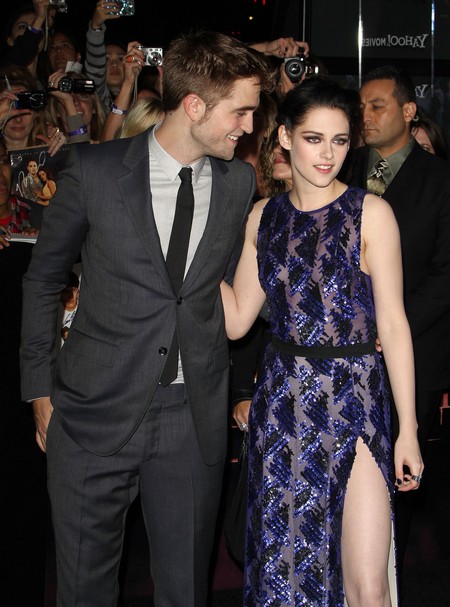 Of course sex sells, and it sells better than anything… even violence!  Will Rob and Kristen have the courage and audacity to take on this project – people are talking about another trilogy here!

Kristen said in a recent interview:  “It’s so funny – I heard about it yesterday.  Rob and Wyck our producer, were talking about it!  I’ve heard it’s quite sexy – very titillating.” When asked if she has ever read the book, she said, “Hell yeah!”

No doubt the teens (and adults!) who flock to the Twilight franchise now would be absolute fans of another Rob and Kristen romance.

Hollywood Life Explains:  Rob and Kristen – you can become onscreen romantic legends too and Fifty Shades of Grey would be the perfect and modern vehicle.

The fact that it’s inspired by Twilight shouldn’t be a negative for you, Rob and Kristen. Again – you need to buck conventional “industry” wisdom and yes, stick with your Twilight associates. It’s a huge plus with who REALLY matters – your audience. They would die to see you, Rob and Kristen, playing billionaire sexual fetishist, Christian Grey and virgin, recent college grad, Anastasia Steele.

As for all the sex. A lot will have to be toned down in any movie but the pair of you have never been afraid of nudity, sexual scenes and raw, edgy subject matter. In fact you thrive on it.

So embrace the opportunity to become a legendary and hit-producing acting couple – you’ll still have highly successful solo careers and surprise your fans by saying yes to the opportunity to star in the upcoming film(s) Fifty Shades of Grey!

On the hand, Rob has said that he fears sex with Kristen!

Will Rob and Kris make the move from Twilight teen dreams to adult-rated raunchies?  What do you think?  Let us know in the comments below.