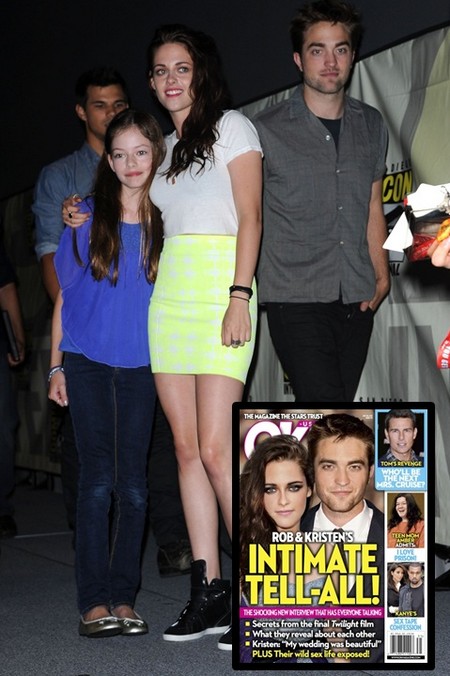 In the latest issue of OK! Magazine, we’re getting one of the most important interviews since Princess Diana appeared on that other show where she discussed her bulimia and emotional issues.

Rob Pattinson and Kristen Stewart reveal some of their most intimate and shocking details. They discuss the secrets from the final Twilight film and answer the burning questions which have had fans drooling in their popcorn. The couple also reveals intimate details about one another and our toes are actually curling from excitement. OK! Magazine teases about their “wild sex life exposed” and we couldn’t stop but giggle in the mirror. It sounds like a National Geographic show with strange narration and theatrical pauses.

“If you look closely, you will see the Kristen creeping up on the Rob. We must be very silent, because their wild sex life could blind you for life. Oh- oh no! She ate his face! Run!”

The two also reveal some startling secrets about one another and we bet you it isn’t about how many times Kristen uses the lady room or how many True Blood episodes Robert might have TIVO’ed. We’re betting it’s about how Kristen struggles to clean all that damn glitter from the bed when Rob wakes up in the sunlight. We’re also placing a few Benjamin Franklins on Kristen’s hair routine and how she does that “perfect flip” when she attempts to portray Bella as an ingénue always on the precipice of a nervous breakdown.

Kristen Stewart also reveals that her “wedding was beautiful”. Wait, what? We’re assuming Kristen is referring to something else?

The interview is allegedly so shocking that it has everyone talking, so it has to be excellent doesn’t it? What secrets do these two hide? How far are they willing to go in the interview?

If you’re looking for us again, you’ll find us shaking in the corner from pure adrenaline and excitement.