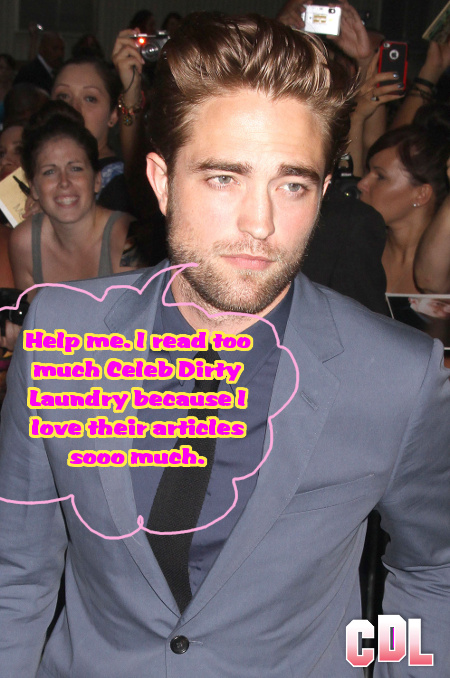 Guess what? Robert Pattinson is just like us because he can’t stop reading celebrity gossip articles! Robert Pattinson, who we all know suffered a scandalous and fiery breakup with his Breaking Dawn co-star Kristen Stewart, admitted to the fact that he can’t stop reading the celebrity gossip articles that feature him. We know all celebs do this and, let’s face it, you would too if you were being talked about all over the internet. It sounds like R-Pattz has the celeb gossip bug pretty bad. Do you think we should call in Dr. Drew to stage an intervention?

Robert Pattinson has several new movies in the works, many of which will put him on foreign soil — far, far away from the girl who crushed his heart. With all the gossip surrounding this nasty breakup, we have to wonder if he’s paid any attention to it. When asked by the Chicago Sun-Times if he indulged in a little celebrity gossip every now and again, Robert said it’s hard for him not to.

“Yeah, I read it. It’s my life. You sort of want to read it. You feel like you need to read it,” Pattinson said. “It’s one of those things where you keep picking the scab. You know you shouldn’t be doing it. But it’s a weird kind of addiction. You desperately want to stop.”

We tend to agree with him and it’s nice to know that at least one celebrity out there is on board. It would be very interesting to see who out there in Hollywood reads about themselves and who out there avoids celeb gossip like the plague. If you were a big time celebrity do you think you would give into temptation and throw your name in the Google News search bar?