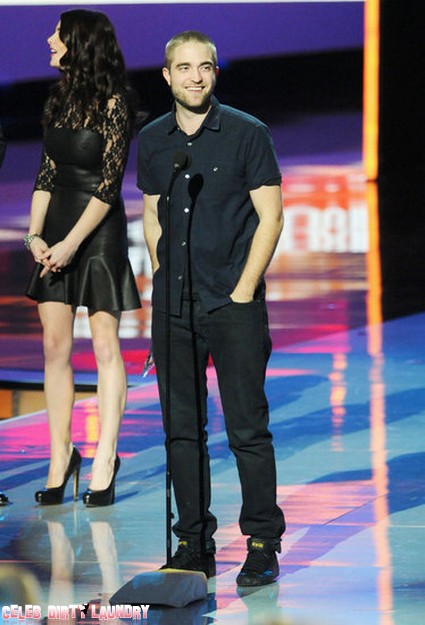 My heart was palpitating as I anxiously anticipated seeing my boyfriend Robert Pattinson at the People’s Choice Awards.  You can imagine my shock and awe when I saw him sitting happily beside Betty White (whom I know personally asked to sit beside Rob) débuting a cropped shaved head.  Deeeelliiisssccious!  Some of you naysayer’s might not fancy it, but I sure do – and can we talk about the bulk my Robbie has put on?  Someone’s beefing up for a role me thinks….

No one predicted that the Twilight heartthrob, 25, would get rid of his longer, floppy mane.  He had skipped the red carpet at the Nokia Theater so we were more than surprised.

Soon into the awards Rob took to the stage to collect the award for favorite drama movie for Water For Elephants.  Was it ever really a doubt as to whether the movie would win?  The people vote after all, and it’s safe to say that pretty much anything Rob does is going to win.  Rob had this to say upon stepping onstage:

“When I was doing this movie, I was having so much fun doing it that I was saying to everyone I didn’t even care if anyone saw it.  But now that people have seen it and they’re giving awards for it, I’m even more thankful for the whole experience, so thank you guys very much.”

My heart is fluttering.  I love him.  One question though – where was Kristen at?!