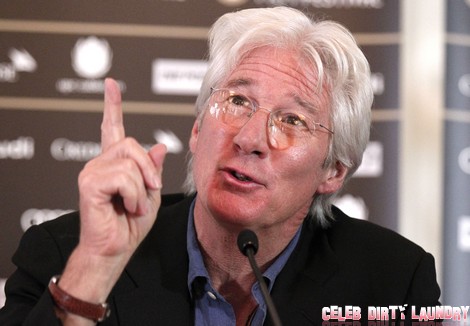 After all the drama surrounding his relationship with Kristen Stewart, Robert Pattinson has really decided to throw himself into work and industry events.  Fresh off of the publicity whirlwind that surrounded the release of Breaking Dawn Part Two, Rob has yet to slow down his pace. On Friday the actor found himself event-hopping, starting with the Arbitrage Luncheon at Osteria Mozza in Los Angeles to celebrate the financial thriller film which stars Richard Gere.

I’m not sure if Rob and Gere are old pals but they sure posed together for photos in a way that made onlookers think the two are obviously on familiar terms. After the impromptu photo session ended Rob was off to Soho House where he met with a Warner Bros. Exec to discuss details of an upcoming movie project.

On Tuesday CDL told you about a fight between Rob and Kristen that left them both looking pretty furious as they walked several feet apart through LAX.  It makes us wonder if the duo is off for good. The last time Rob dumped Kristen he still showed up for all scheduled appearance and was ready to answer awkward questions if he found himself in the hot seat.  He seems to be one of those people that doesn’t let his whole life suffer just because his relationship status is bad.

Do you think he has had a rough week trusting the cheating home wrecker and the fighting has reached a boiling point once again? I mean check out the two ‘lovebirds’ at the airport – not even smiling or talking to one another. Do you think that Rob was supposed to make the industry rounds this week without Kristen? Or is her absence these past few days a sign that perhaps Rob has finally gotten smart and kicked her cheating sour puss to the curb once and for all? Tell us your thoughts in the comments below!