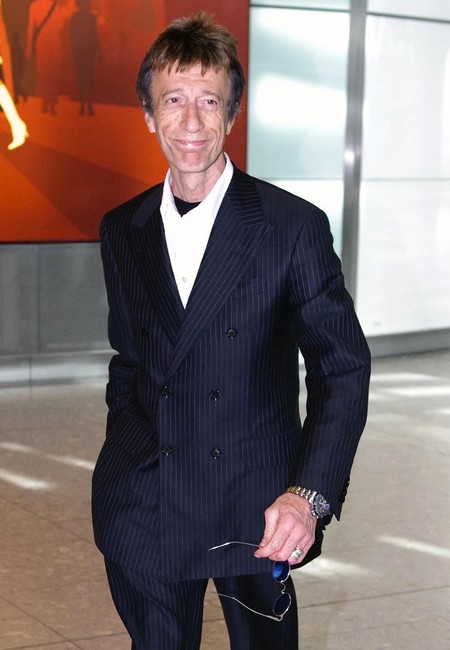 Robin Gibb has sadly lost his battle against colon and liver cancer. The legendary Bee Gee was thought, at one point, to have fought the horrible disease but a second tumour was found and thereafter, he developed pneumonia.

Robin’s wife Dwina, Brother Barry, daughter Melissa and sons Spencer and Robin-John were at his bedside in Chelsea, West London.

During Robin’s battle he was going to compose a requiem for The Titanic and the music premiered in central London, but sadly Robin was too ill to be there.

Robin feared that his cancer and the deaths of his brothers, Andy and Maurice, was pay back for the successful careers that they had, here’s what he once told The Sun “I sometimes wonder if all the tragedies my family has suffered like Andy and Maurice dying so young and everything that’s happened to me recently is a kind of karmic price we are paying for all the fame and fortune we’ve had.”

Robin leaves behind his second wife, Dwina Murphy Gibb, an author and an artist who tried to nurse him with health foods and brewed herb teas, along with conventional treatments. Robin, the co-founder of the Bee Gees, also leaves four children behind. Robin was “an ardent vegan and teetotaller” with a career spanning over four decades as the lead singer of probably the most famous singing group in the world, selling over 200 million records with hits like “Stayin’ Alive” and “Night Fever.”

Robin made his battle with cancer public and it was very inspiring to see his courage and determination throughout.

Robin admitted to having had a difficult time coming to terms with his twin brother – Maurice’s death and said, “I just imagine he is out there somewhere and I will bump into him one day.” It’s sad that Robin’s death would be the only way to bring the twins back together again, but somehow I think both Maurice and Andy are waiting for him.

Our sincere condolences to the Gibb family.