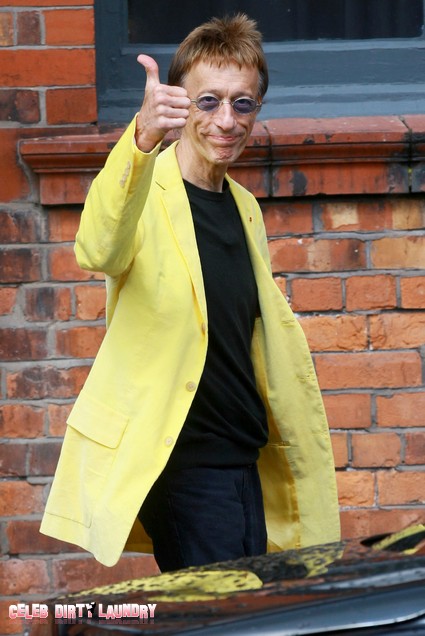 It’s only been around two weeks since Robin Gibb received a standing ovation as he got on stage for the first time after his cancer diagnosis five months ago, and now, the Bee Gees member’s health has suffered from a setback making him have to go back to the hospital. Gibb amazed doctors with his incredible progress in trying to fight colon and liver cancer, but now he has been admitted into a London Clinic just three nights ago.

Last year Gibb had to cancel many gigs and appearances because of the diagnosis, this time he’s taking the treatment well, his agent even said ‘Robin is at the London Clinic as part of his treatment and rehabilitation.’

Gibb has spoken out, saying that he feels fantastic continuing to fight for his health. It was only 12 days ago that he returned to the spotlight joining the military trio The Soldiers for the Coming Home charity concert at the London Palladium. It was his first public appearance in a while; he closed the event with a Bee Gee’s classic How Deep Is Your Love and I’ve Gotta Get a Message to You, which he recorded with The Soldiers last year supporting the Royal British Legion’s Poppy Appeal.

He spoke before taking the stage to his fans saying that he felt fantastic and thanked them all for the support they’ve given. He posed for photos before walking out to a massive applause at the iconic London venue. He joked around with the shows organiser to hurry up with his closing speech, showing us the funny side of his personality.

Robin spoke about his cancer battle and how he impressed all the doctors with his progress. He said that he was treated by a brilliant doctor and told a joke about the medics saying he must be from another planet.

He’s going to be premiering his first classical composition The Titanic Requiem with the Royal Philharmonic Orchestra in April.

Robin has also had health problems with a twisted bowel, which is the condition that led to the death of his twin brother Maurice nine years ago, at the age of 53. He’s revealed that he will beat the cancer he’s been diagnosed with and continue to write music. He also said that he has begun to gain weight saying ‘I love food, I love eating.’ Robin mentioned that he’s always been skinny and that it’s nothing new. “I’ve always been thin. If you go back to when we first started I’ve always been skinny. It’s hard for me to put on weight. If I had a choice about how I’d like to feel for the rest of my life, this would be it. If I wanted to tick all the right boxes about sense of well-being, it would be now. This is the way I’d like to feel. I don’t know how I could feel any better.’

It’s very inspiring to see Gibb’s courage and determination to fight the disease, I hope he wins.