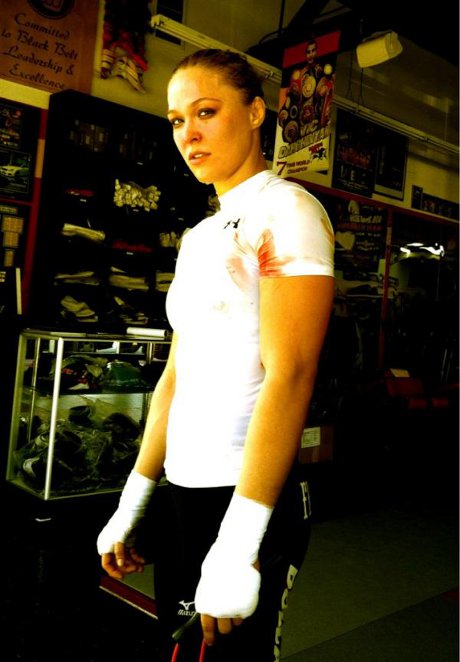 Ronda Rousey is getting geared up for her first official UFC fight, and she’s ready to rock it with her toughness. Apparently, she’s signed a contract with UFC 157 to fight in the first ever female UFC event in history. She will be matched against 28-year-old Liz Carmouche, a young woman who possesses a similar amount of badassery. This fight is a historical event, and it will be interesting to see what kind of viewership the fight receives.

According to TMZ: “Rousey was named UFC champion (female 135 lbs division) when she signed with the organization — and her belt will be up for grabs. The fight is set to go down on Feb. 23 in Anaheim, CA. FYI — Carmouche has a 7-2 record and an awesome nickname — The Girl-rilla.”

There’s already some drama going down, and the ladies haven’t even stepped into the ring yet. Apparently, Cris ‘Cyborg’ Santos wants to fight Ronda, but Ronda is unwilling to make the weight jump and Cris is unable to make the weight loss to fit within Ronda’s weight class. “This is a fight all the fans want and we want to give to them. We have offered to fight Ronda at a catch weight of 140lbs. She has turned that offer down and will not budge to make this fight happen.”

Ronda Rousey also told TMZ a few days ago that she’s totally game for and approves of pre-fight sex. While many male athletes oppose the practice, Ronda says it’s an old theory that doesn’t necessarily apply to female fighters. “I try to have as much sex as possible before I fight, actually.”

Apparently, it releases testosterone which is good for brawling and fighting in the ring. But we’re not really scientists here at CDL so that’s where we’re going to stop with all the smart-talk.

Are you looking forward to the Ronda Rousey and Liz Carmouche UFC fight? Will you tune in to see how these tough ladies duke it out in one of the most brutal rings in the sport of fighting? I think it’s wonderful how UFC is opening its doors up to female fighters, as it only seems fair. Virtually every other sport is geared toward both, and I suppose UFC shouldn’t be any different. Any UFC fans out there? Would you rather see Ronda fight Cris Santos?