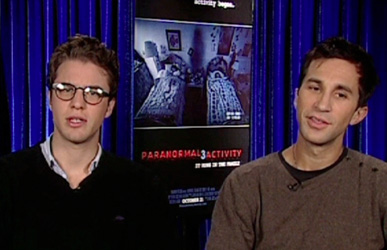 “Mr. Hollywood” Shannon Rose sits down and talks with the directors of the hit horror film Paranormal Activity, Ariel Schulman and Henry Joost about their upcoming sequel “Paranormal Activity 3” set to release on DVD.

The movie portrays two sisters Katie and Kristi, who befriend an invisible entity who resides in their home.  Little do they know the horror their friend will wreak on them and their home.  Providing one nightmare after another, in one of the most horrifying sequels yet for Paranormal Activity.

“Mr. Hollywood” Shannon Rose talks with the directors, and gets to know the inside scoop about their vision for the movie and the process on which it was made.  You’ll find out their favorite scene, how they cast the actors and how vital it was to the movie and lots more.