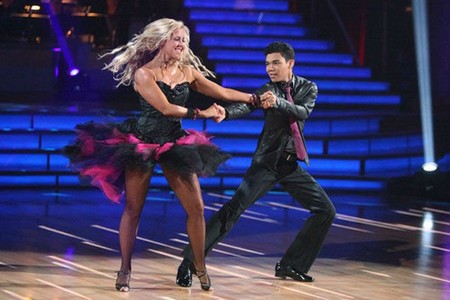 Roshon Fegan danced the Rumba tonight as Dancing With The Stars continued with its sixth episode. The theme for this week’s episode is ‘Motown Week.‘  It will honor Motown’s greatest music – Motown Legends Smokey Robinson, The Temptations and Martha Reeve.  We recapped the tonight’s show for you and if you want to see how all the couples did go HERE! Did you see Roshon’s performance last week if you missed it you can see it here!

Roshon Fegan and professional dancer Chelsie Hightower, dancing the Rumba – Chelsie had this to say about their Rumba this week. “Roshon is doing great with rumba! He Is such a talented dancer. Love teaching him.”   After last week’s show Roshon said he  may take his shirt off if his fans bring him back.   Well they brought him back – so check out the video and see what Roshon did!

Judges comments: Len: The movements were like paint by numbers, I wasn’t overboard about it, it was too jerky. I didn’t dislike it though. Bruno: What you lack in size, you make up in fire. Your body wants to hit the beat all the time, but it’s not hip hop it’t the Rumba, the performance was great. Carrie Ann: It definitely got a little sexy there in the end, in general I found your movements a little over exaggerated and at one time your foot came way off the ground.

Don’t forget to finish the show DWTS will feature a special Motown Dance Marathon, where the couples will be showing off their classic dance moves from the Motown era.  We will be posting the video of it later tonight so don’t forget to come back and check it out!

Watch the video below and let us know what you think? Do you think that Roshon did enough to keep her around for another week? Sound out in the comments below!