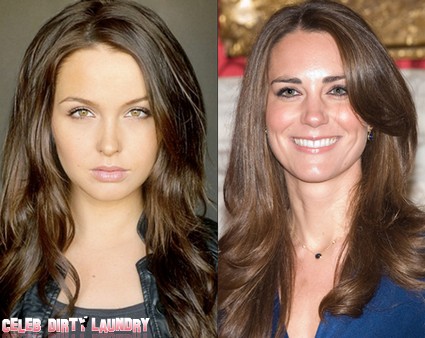 True Blood will soon welcome royalty. No Kate Middleton isn’t joining the cast. But they’re getting the next best thing – the actress who played The Duchess of Cambridge in a TV movie last year. Brit Camilla Luddington has signed on to play a fairy in the vampire TV series.

Camilla portrayed the heir to the throne’s wife in 2011’s Lifetime movie William & Kate. The movie was a bit of a shocker but Camilla looked the part (unlike her fake Prince William). It was a quick cash in before the Royal wedding and it helped put her on the map. You might be lucky – or unlucky – enough to catch a rerun one day.

Now she’s going to the fictional Bon Temps. The brunette stunner will play a fairy called Claudette who is one of Claude’s many sisters in season five of True Blood. She’ll give Sookie Stackhouse advice on what it means to be a fairy. Filming is well underway on the much anticipated new season. We’ll get to see Camilla on screen when the new shows debut in the summer.

If you think Camilla looks familiar you might have seen her in Californication. She’s appeared in nine episodes as Lizzie. The 28 year old has also had roles in CSI and Days Of Our Lives. But True Blood could be her big breakthrough in the US. I wonder if her famous lookalike will tune in to check her out?

For more Royal news : Kate Middleton To Hook Up With Aussie Fashion Designer