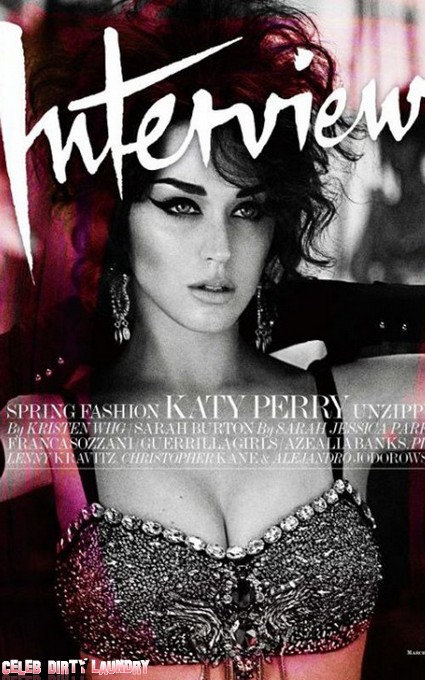 The newly single Katy Perry is having an identity crisis. She’s been looking like Smurfette since dying her hair blue …and now she’s chaneling dead rocker Amy Winehouse. Check her out on the March cover of Interview magazine and tell me that eye liner and tousled hair is not inspired by the girl who sang about Rehab but wouldn’t actually take her own advice?

It’s a new look for the California Gurl who’s usually in wacky, rainbow outfits …and has been known to cavort in a garden full of lollipops in her music videos. But that was before her shortlived marriage to Russell Brand went sour. Now she’s not so sure about love and being the good girl. This edgy magazine spread in the cool glossy is part of her reinvention.

Inside the mag the 27 year old is only seen in black and white. It’s all very arty. She’s wearing plenty of bling, a bra top and long black gloves in the fashion spread. Her makeup is once again inspired by Amy Winehouse, as is her hairstyle. I’m just glad to see her without blue hair. The interview is by Bridesmaids star and Saturday Night Liver Kristen Wiig. The singer opens up about the last couple of months, the Teenage Dream re-release and new single Part Of Me.

Katy Perry has a tough year ahead. She has to follow up a mega huge album and adjust to not being part of a celebrity couple anymore. She is getting some help in the romance department though from an unlikely matchmaker. Celeb Dirty Laundry covered it here Elton John Plays Cupid For Katy Perry