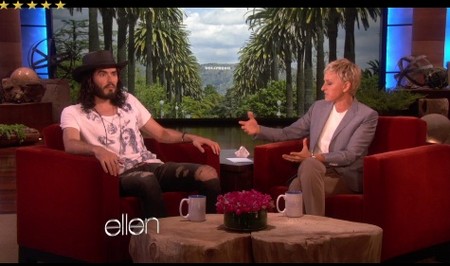 Comedian and actor Russell Brand visited the set of Ellen today, and admitted that a great deal has changed in his life since last appearing on the talk show back in December.

If you recall, the last time Russell sat down with Ellen he adamantly denied all the rumors suggesting that his marriage with then wife Katy Perry was on the rocks.  Flash forward several months later, and the two are no longer.  The pair officially went their separate ways shortly after his interview with Ellen, and Russell has spoken very little of what exactly went wrong.

Well, today Russell gave us a little bit of insight as he discussed his split from Katy.  Despite reports from tabloids, he still insists that he cares deeply for Katy and is doing his best to keep things amicable.

“I still love her as a human being, but, sometimes when you’re in a relationship I suppose it doesn’t work out, does it? But that doesn’t mean I regret it or anything. I was very happy to be married with her. She’s such a beautiful human being and I just have only love and positivity for her.”

So what the heck happened Russell?  He went on to say that, “you can’t absolutely make everything the way you want it to be in life. Sometimes things are just different and you just move with that and try and remain in contact with what is beautiful about yourself and each other with any situation.”

Hmmm, not exactly the juicy details I wanted to hear but I suppose that will do.  Russell for his part is still single, while Katy is rumored to be dating Robert Ackroyd, the guitarist for Florence and the Machine.