Russell Edgington Is Smitten With Love In ‘True Blood’ Season 5 — With Who? (Poll) 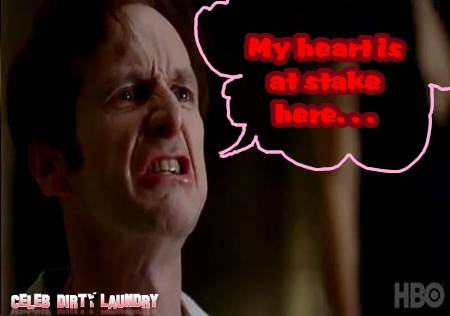 A passionate Russell Edgington, played by actor Peter O’Hare, won’t just be coming back for blood in season 5 of HBO’s hit supernatural drama True Blood — he’ll also encounter some unexpected love. Now, fans of the show might not be quick to associate the word love with the crazed, always-lusting-for-blood Russell Edgington, but they’re going to have to get used to the idea of this impulsive villain hanging all over one of their fave characters . . . . Who might that be you ask? Who will be the subject of Russell Edgington’s new crush?

Unfortunatley, Peter O’ Hare, in an interview he did with TVline, didn’t discuss who his new love interest will be, but he did prepare us for what we should expect to see this season with his character.

“He falls in love, it comes unexpectedly, it comes when he least expected it,” O’Hare tells TVLine. “He looked across the room and he saw somebody who he never had thought of falling in love with and something happened. And then later, while sharing a body, something else happens.”

Information surrounding Russell’s motives for this season have been somewhat unclear — of course we know that he will be chasing Sookie all over Bon Temps trying to get a taste of her fairy blood, but other than that his intentions have been relatively hushed-hushed over the past several months.

The actor says that Russell will lose his state of incredible I-need-to-take-over-the-world viciousness. However, he also says this: “Make no mistake: He’s still really dangerous, and he still kills a lot of people, but he kills them with glee!”

Interesting. Not only will he kill people, but he’ll do it while singing and dancing. If he sings Journey’s “Don’t Stop Believing” I’m done with True Blood forever. Chances are though that Alan Ball won’t do that to me.

The thing that makes Russell such an incredible antagonist is his overly obsessive behavior; whatever he focuses on, he obsesses over it, throws every ounce of his being into the cause until he either gets what he wants or fails at achieving his goals. Whomever he falls in love with this season, one thing’s for sure: he won’t take “no” for an answer.

O’Hare also says that it’s a character we know . . . and that it will come as a complete shock. Hmmm . . . we know that Russell was in a relationship with Talbot — a male vampire that Russell turned — before Eric came along and killed Talbot out of vengeance. Will Russell accidentally fall for Eric, the man who killed his lover? Or might he really shock us and throw us for a loop by falling in love with Sookie, the girl whose blood he so longingly desires? As always, I have a poll for you. Tell me who this crazy vampire will choose.

I don’t know why (really I have no clue), but I have a feeling he’s going to fall in love with Pam. *gasp* For more True Blood gossip and news, head over to our Truebie Spot!