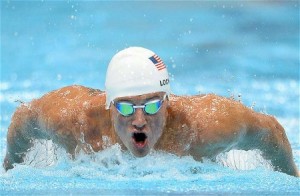 Ryan Lochte can still crush on Blake Lively, but unfortunately he won’t be able to snag her up considering Ryan Reynolds has already successfully taken the Gossip Girl actress off of the market. Just last week, Olympic Gold medalist Lochte declared his crush on Lively but he was a bit too late in trying to woo her.

Lochte told PEOPLE magazine on Monday that he was surprised to hear of the South Carolina ceremony that took place last Sunday, “I just heard about [the wedding]. I didn’t even know she had a boyfriend until someone told me after I said I had a crush on her.”

Too bad too sad.

At least Mr. Lochte isn’t too upset that Reynolds took the plunge with his girl. He added, “That’s great for them. I just want to congratulate them and wish them the best.”

I mean really, what else could he say?

The good news is that there are plenty of fish in the sea and from what it sounds like, he may have found another celebrity crush in…wait for it…Paris Hilton.

And get this, he may already be trying to woo Paris. Lochte did get to spend a little bit of time with Paris during New York Fashion Week. He gushed, “I met Paris Hilton at [Brian Atwood’s cocktail party] last week. I got to hang out with her. She’s a really sweet girl. Very attractive, I must say.”

In other words, don’t be surprised if you see Lochte and Hilton canoodling and cuddling together one day.