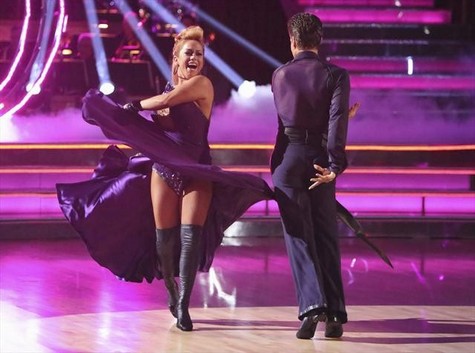 Sabrina Bryan danced a Disco routine for the dance style that her competitors chose for her Dancing with the Stars All-Stars 2012 Season 15 performance tonight.  All the 9 remaining couples hit the stage tonight as the competition heats up with world famous choreographer and recording artist Paula Abdul joining the judges in the ballroom as a special guest judge If you missed the show, we recapped tonight’s show for you and if you want to see how all the couples did go HERE!

Sabrina Bryan and professional dancer Tony Dovolani dancing a Disco routine.  “It’s more Studio 54 — really edgy and bringing back that glam that was going on in the ’70s in Hollywood,” Sabrina said. “There are lifts. We went a little conservative last week and kind of got nailed for it, so this week, we’re going balls-to-the-wall. We really want to amp it up and do everything we can.”

Judges’ Comments: Len:  “I am having a moment! I thought it was fabulous I was with you, well done!” Bruno: “The disco diva as performances go this will probable the most vibrant and alive.  But, you lost timing twice.  But I am telling you had all the glitz and the glory of disco” Carrie Ann:  “Last week I asked you to be more than I expect.  This week it was all I wanted, but Bruno was wrong you did not lose timing.  It was great!” Paula: “You matched the Studio 54 right one.  Louis you choreographed to Sabrina’s strengths a couple of missteps but overall really really good.”

Dancing with the Stars continues tomorrow night with the Results Show. DWTS  Season 9 champion Donny Osmond returns to the ballroom performing a duet with international recording star Susan Boyle. Their breathtaking duet, “This Is the Moment,” will be accompanied by dancers Kym Johnson, Tristan McManus, Anna Trebunskya and Henry Byalikov.   In Tuesday night’s “Macy’s Stars of Dance Performance,” choreographer Christopher Scott returns to the ballroom, but this time brings with him the Legion of Extraordinary Dancers (LXD). Before the night’s end, one more couple will be eliminated from the competition.

Watch the video below and let us know what you think? Do you think Sabrina did enough to avoid elimination this week? Sound out in the comments below!