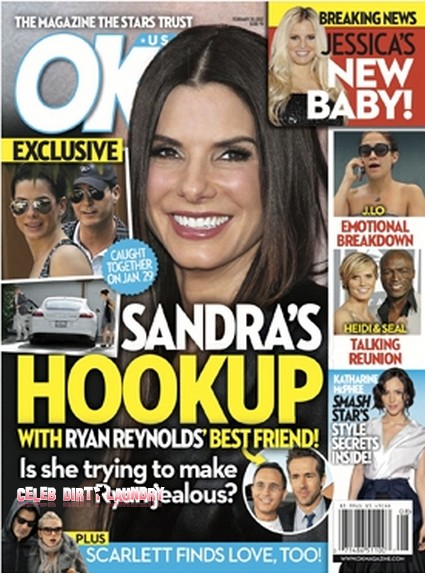 The current issue of OK! Magazine features the cover story ‘Sandra’s Hookup with Ryan Reynold’s Best Friend.’  The magazine claims that they have the exclusive details of how they caught Sandra Bullock, 47, with Ryan Reynold‘s best friend Jonathon Komack Martin on January 22nd, 2012.   They go on to claim that the only reason Sandra is seeing Ryan’s friend is to make him jealous.  It was rumored several months ago after Ryan and Sandra spent a lot of time together that they were dating but he dumped her for Blake Lively.

OK! has more details: “Sandra and Jonathan arrived together at a private party at an L.A. townhouse.  “Jonathon was very attentive to Sandra,” says an event onlooker. “He didn’t leave her side all afternoon.”  “Sandra and Jonathon are great friends,” another insider divulges, adding, “they were introduced years ago and they’ve always hit it off. She’s been spending more time and more time with him, going to parties or just hanging out, and that’s got everyone talking.  “She’s being extremely secretive, though, which is typical. And give what she’s been through, you can hardly blame her,” says the insider. “Even when probed, she won’t reveal much more than saying what a great guy Jonathon is.”

Sandra had a rough 2011 after she kicked her serial cheater husband Jesse James to the curb, so I hope this is true and she has finally found someone.  What do you think has Sandra finally found or is she trying to make Ryan jealous?  Sound out in the comments below and let us know!

Also included in this week’s issue the magazine has all the details on what’s behind Jennifer Lopez’s breakdown? Sharing custody with Marc Anthony, the superstar mom misses her twins and How are the kids coping?

To find out more about Sandra and her date and a whole lot more, pick up the current issue of OK! on stands Thursday!