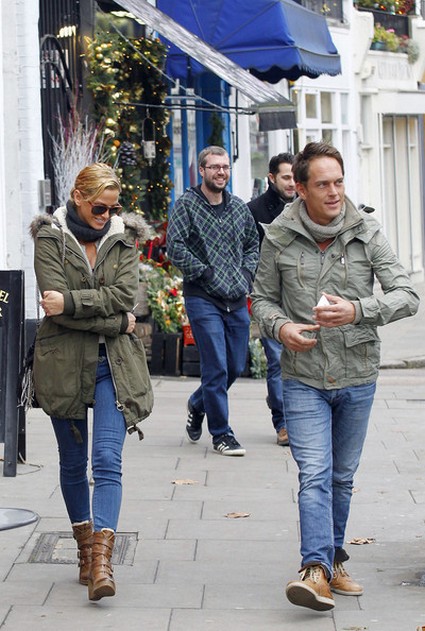 Sarah Harding‘s boyfriend, Theo De Vries, has accused her of biting him during a violent holiday tussle.  The Dutchman was enjoying a getaway with the Girls Aloud singer on New Year’s Eve in Innsbruck, Austria, when the fight erupted.  Theo claims Sarah “bit” him on the leg, flung an ashtray at his head and left him with a bloody nose after hitting him in the face.

He said: “I have a big black eye. Sarah bit me on my leg and yesterday I went to the hospital to get an injection. It’s very dangerous, I have a big scar on my leg now with five teeth marks.”

“She threw an ashtray at my head, hitting my eye. She gave me a bloody nose. Don’t forget that she is a very good kick-boxer. She has done a lot of kick-boxing in the past.”

Sarah left an American rehabilitation facility in October after being treated for alcoholism and depression – may we suggest that treatment was NOT completely successful? The singer was being spotted arriving back in the UK with a bandaged arm but Theo has denied claims he was the aggressor in the fight.

Theo said in an interview with The Sun: “It’s zero per cent the truth. I want everyone to know that I am a normal decent man. I didn’t hit Sarah one time.  I really had to laugh at that picture. Sarah is an actress and don’t forget it.”

Sources have suggested Sarah was acting in “self-defence” and plans to press charges against Theo, who she had reportedly been dating for three months.

An insider said: “Sarah is still really shaken up. She has decided to press charges once she has had time to recover. She was acting in self-defence. She bit Theo because she was on the ground and it was her last line of defence.”

“She had deliberately flown to Austria to avoid the temptation of drinking. Theo turned up and hit the bottle when she told him their relationship was over.”

Meanwhile, Austrian police have implied that Sarah – who called off her engagement to former fiance Tom Crane in September – is not under suspicion following the incident.

A spokesperson explained: “Officers were called to calm things down after a relationship-related incident. A woman filed a complaint against a man from the Netherlands. He was questioned and then released. A report is being prepared for prosecutors who will decide if assault charges are filed.”