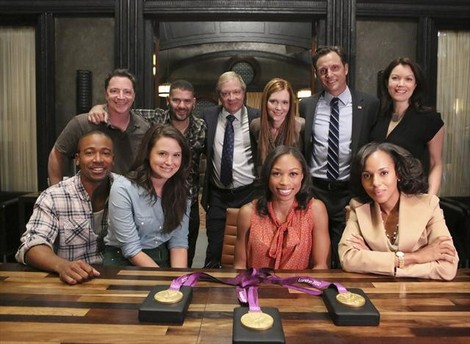 Tonight on ABC Scandal returns with the premiere of its second season called “White Hat’s Off.”  If you have never watched the show it is not to be missed.  The show is about Olivia Pope who has dedicated her life to protecting and defending the public images of the nation’s elite by keeping those secrets under wraps. Revered and feared at the same time, Olivia, a former communications director to the President of the United States, left the White House to open her own prominent crisis management firm.

Her staff are at the top of their game when it comes to getting the job done, but it becomes apparent that these “gladiators in suits” who specialize in fixing the lives of other people sometimes can’t lives closer at hand, their own. In Season Two of ABC’s “Scandal,” the creator and executive producers of “Grey’s Anatomy” and “Private Practice” will delve further into the behind-the-scenes machinations of this mesmerizing top image-maker and her team.

On the Scandal season 2 opener “White Hat’s Off” tonight Quinn’s identity is finally revealed, and the more the Pope & Associates team learn about her past, the more they realize she could be their biggest scandal yet. Meanwhile, a senator seeks Olivia’s help when his personal life is about to become a public disgrace, and President Fitz is stuck between a rock and hard place when Mellie and Cyrus put him in a very compromising position during a live television interview.

Tonight’s episode looks like it is going to be a great episode and you won’t want to miss it, so be sure to tune in for our live coverage of ABC’s “Scandal” Season 2 premiere at 10 PM EST! While you wait for our recap hit the comments and let us know if you are excited to the season premiere of Scandal?

Tonight’s Recap: Tonight’s episode starts with a clever recap of last season. President Grant and his wife Mellie are clearly one of the unhappy couples in DC even though she’s expecting a child. She is obsessing over the nursery as he stares blankly out the window praying she’d stop talking.

Lindsay Dwyer is a woman accused of killing her boyfriend. She found out he was banging another chick and supposedly bombed his work killing 7 people total. It’s a death penalty case that is beyond complicated. Lindsay says she remembers nothing but woken with new identification stating that her name was Quinn Perkins. She swears she is being framed for the murders and for some reason, Olivia believes her.

Olivia is summoned to Congressman Shaw’s office because his aide’s smell a rat on the inside. She is begged to go to Shaw because he can’t go to her. His office is being bugged, they realize as soon as they walk through his door. He swears he didn’t break the law but he did have sex on his desk in front of the camera.

Olivia and Abby realize they have 24 hours to block Shaw’s sex tape from being released when Olivia realizes that there’s a problem with Lindsay. She runs to the jail only to have Lindsay fire her. She opted to take a plea deal because she believes it’s her only chance. Olivia freaks out on her and tells her that she doesn’t take cases that she won’t win and she won’t let Lindsay die in prison.

Olivia catches Shaw’s tape and then does her homework. She finds 13 women that he has been linked to in the last week or so and wonders what else is hidden.

Mellie and President Grant (Fitz) reveal on live tv that they are having a boy. Mellie  tries to get a little bit in about foreign policy and Fitz freaks out telling her that she is ornamental to the oval office, not functional. She claims that he has always known how to hurt her and reminds him that she gave up her law career so that he could be president. A move she’s clearly regretting.

Fitz sneaks a phone call to Olivia and they clearly belong together and need each other. Liv understands him like Mellie never could.

Olivia coaches Shaw on what to say to the press in light of his sex tape hitting the media. Meanwhile Lindsay is losing faith and so is the staff after hearing a jury member on their cell saying they plan to hang her. This leads to Olivia appearing to call in a favor that has all charges tossed out based on not enough evidence.

The show ends with a million questions. It goes back over Lindsay’s recollections of waking in a hotel room with a whole new identity and after she walks out the front door the man who had orchestrated the whole situation gets into a car with none other than Olivia telling her “It’s done. She took everything we left her.”  Gotta tune in next week to find out how Olivia is connected!