Scarlett Johansson Nudes Worth Only $66,000 (Photos) 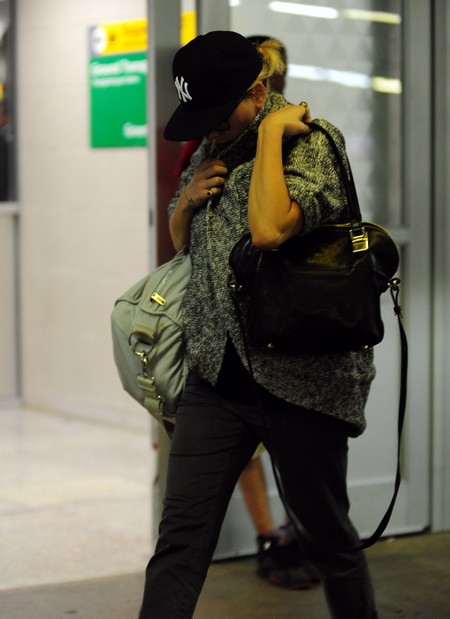 Earlier this year, a poor sap named Christopher Chaney famously hacked nude photos of several female celebrities including Scarlett Johansson, Mila Kunis, Christina Aguilera and Renee Olstead.  It seems crazy that celebs put their compromising pics on cell phones and computers when everyone knows that this is far from secure thing to do. It seems that Scarlett has learned her lesson – look at the pic above snapped this week as she hides her face at JFK.

Unless a celeb secretly wants their tush all over the Internet they are best off NOT to set themselves up to be hacked.  Look at the extent to which the paparazzi regularly go – imagine what certain people are willing to do to get into celebs’ electronic media?

According to TMZ, new documents have been filed by the U.S. District Court located in California, explaining how celebrity nude photo hacker Christopher Chaney is going to be sentenced. Not only is the clever thief being sentenced to 71 months in prison, but he is going to go broke when he pays the victims that he’s hacked.

The court is ordering Chaney to pay $7,500 to Christina Aguilera which seems odd  since she is rather gross; $76,767.35 to Renee Olstead who’s very hot – and for some reason the judge felt that Scarlet Johansson was less hot, as he has awarded her only $66,179.46.

Don’t you think Scarlett’s nudes should have been worth more? We live in one sick and cruel world, I personally believe Johansson is worth much more than just a measly $66k, she’s the hottest one named on the list of the hacked victims!  You can she her famous nude hacked photos right here!

Fellow fans, let this be a lesson. Next time you think how amazing you are to have found nudes of that certain women you have a creepy obsession for, remember, this isn’t something you should bask in the glory of and post to the internet.  You could easily be found out and thus completely screwed like Chaney – who is not only paying the victims but also has to pay $10,000 to AFTRA Health Fund and let’s not forget the jail time.  This really makes me wonder if those pictures were really worth it in the end.