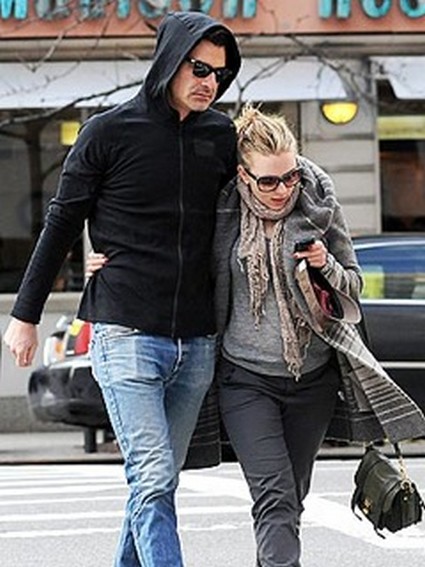 Back in love? While her Ex-Husband Ryan Reynolds is off gallivanting with Blake “I’m so hot, I’m definitely a robot” Lively, Scarlett Johansson has also appeared to have moved on—with a tall, dark, mysterious man. The “We Bought A Zoo” actress was spotted getting close with her new guy, 27-year-old Advertising Executive Nate Naylor, in New York City over the weekend. And if pictures are worth a thousand words, these two are definitely getting it on!

“They’ve been dating for five months,” the source close to the couple tells People magazine of the new couple who have been spotted frequenting some of Manhattan’s hottest restaurants and bars. Apparently, things are moving pretty fast with the pair, whom RadarOnline claims have already made plans to shack up.

We don’t know much about Naylor, aside from his job, location, and the fact that he is an avid art collector. Apparently, Scarlett’s real life mad man knows loads of famous people in the art community—such as fashion photographer Terry Richards—so he’s not intimidated by Johansson’s fame. Still, he’s not up for becoming famous himself.

“They’re keeping it very, very low key. He’s not one for the limelight and fame and she likes that about him,” a friend close to the couple told RadarOnline.com. “They have a real connection.”

The actress, who is also 27, ended her two-year marriage with Ryan Reynolds in 2010 and was previously linked to Sean Penn and Joseph Gordon-Levitt. Penn, who was 24 years her senior, reportedly dumped the blonde beauty after only 5 months, while friends of the star say Gordon-Levitt was never anything more than a good pal to Johansson.

News of this new relationship comes hot on the heels of news that Johansson and Reynolds’ L.A. love nest has just hit the market. The Los Feliz four-bedroom, three-bathroom estate is back on the market for $3.6 Million.

Yowza! That ought to buy a nice apartment on the Upper West Side!