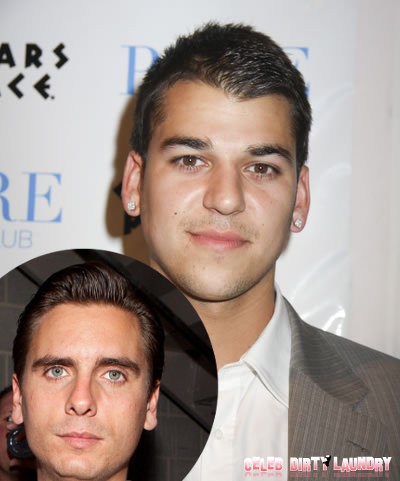 A new picture of Scott Disick and our good pal Rob Kardashian has just surfaced, and it features both of them in a very questionable position. The photo shows Scott with his head resting in Rob’s crotch, and the two are napping on what looks to be a super sketchy couch of some sort.

There’s a Bloody Mary on the table and the two are all cozy and bundled up in their comfy clothes. And this means, of course, true love. If you’ve watched Keeping up with the Kardashians at all, then you’ll know that Scott and Rob are fairly close buds (or have been in the past). We’ve known that for a while. But does their relationship transcend friendship? We’ll let you be the judge of that.

With pics like these we’re always skeptical, as those photoshoppers and scammers are incredibly talented at deceiving our lil’ celebrity-scandal radars; however, I’m going to go out on a limb and say that this pic is totally legit. How do you think the Kardashian sisters would react to this scandalous revelation? What do you think famewhore mom Kris Jenner would do if she found out that her son is in a relationship with the father of her daughter’s children? *GASP* I don’t know if we can handle all of this potential scandal and rumor-age this early in the day!

Rumor has it that Kourtney Kardashian and Scott’s relationship are on the rocks, so at least he has a back-up romance plan for when things completely fall through for the couple (who are still “formally” a couple).

Check out the picture of Scott Disick and Rob Kardashian. And let us know what you’re thinking in the comments section below.