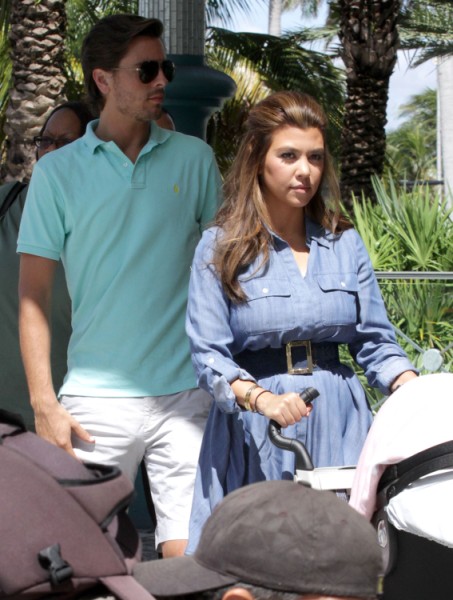 Two kids definitely hasn’t slowed Scott Disick. Kourtney Kardashian’s other half was recently spotted in Connecticut where he p-ssed off one woman and cozied up to another – neither of the two being Kourtney, natch.

“He stayed until 1 a.m., but I’m sure the after-party in his suite was epic,” a partygoer from the Vista Lounge in the Mohegan Sun Casino said. Scott was having a sausage fest while Kourtney and Kim were in Miami filming the appropriately titled, Kourtney and Kim Take Miami.

But the absence clearly wasn’t making Scott’s heart grow fonder. Eyewitnesses said he got close with a mystery blond during the night and resorted to the douche behavior he’s so well known for. Apparently he was sh-tty to his waitress and even dumped some drinks on her. Clearly, he wasn’t doing Mama Kris Jenner proud. “It seemed so obvious his relationship with Kourtney is for show,” one eyewitness told The Daily. “He’s using her name to be able to headline events like this and get free booze and chicks for himself and his friends. Meanwhile, she’s at home with two kids. It’s sad.”

OK, here’s my first question. Were cameras around? Scott plays a part and he plays it well. I could see this being an episode entitled, “When the cat’s away the mouse will pour drinks on a tired waitress.” Because I don’t believe a damn thing those Kardashians do and Scott is a Kardashian through and through. Everything they do is for ratings and relates to one of their million shows. I have no hard time imagining Scott is an assh-le. He probably is a major one. I’m just saying I think he brings out the major douchery for the cameras and Kris Jenner loves him for it.

Do you think Scott Disick cheats on Kourtney when she’s off making all their money? She’s his meal ticket! Is Scott that dumb?