Scott Disick Explodes Over Kourtney Kardashian’s Demand For A Prenup 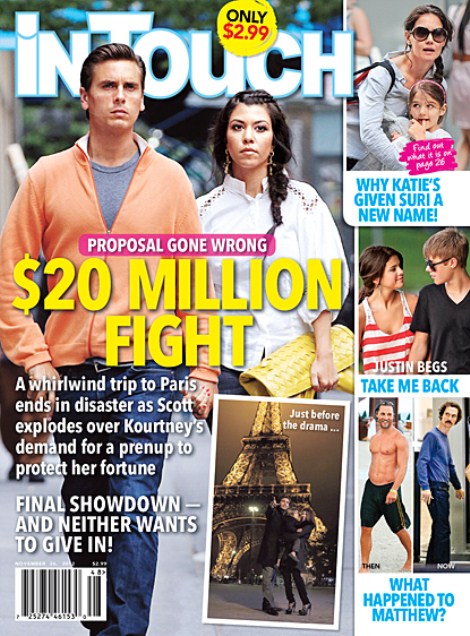 The current issue of IN TOUCH features the cover story ‘$20 Million Fight!”  The magazine claims Scott Disick exploded after Kourtney Kardashian demanded a prenup.  I think we all knew that it would eventually come to this- and by this I mean Kourtney  and Scott Disick battling over money.

They are always at odds so the fact that they are fighting is nothing knew, but this seems to be a real zinger. Apparently the parents of two decided to take a whirlwind trip to Paris. I’m guessing Scott was trying to win his way back into Kourtney’s heart and maybe even her bed for more than two nights a year. Anyway, things tanked when marriage came up and Kourtney dropped the bombshell that she’s want a prenup.  According to the latest issue of In Touch, Scott freaked out which kind of proves what everyone has long said, he likes her money more than he likes Kourtney.  The two are now locked in a $20 million dollar fight that doesn’t seem to have an end in sight.

In other Kardashian news, it looks like things really are rocky between Khloe and Lamar Odom. It has now gotten so bad that the new X Factor host has issued  an ultimatum. Lamar has grown so distant due to stress with basketball and supporting Khloe through her infertility that she can’t stand it any more. Khloe is demanding they head for couples counseling immediately.

Nadya “Octomom” Suleman checked herself into rehab recently and now she has decided to have a nice sit down chat with In Touch about what caused her to hit rock bottom again. Also in this issue there’s news on Teen Mom 2’s Leah Messer’s latest pregnancy.  She’s barely out of school and already on marriage number two and baby number three. She has learned that she and new husband, Jeremy Calvert are expecting a baby girl. Grab the latest issue of In Touch for more details on all of these great cover stories!