Seal Opens Up About His Divorce On Ellen 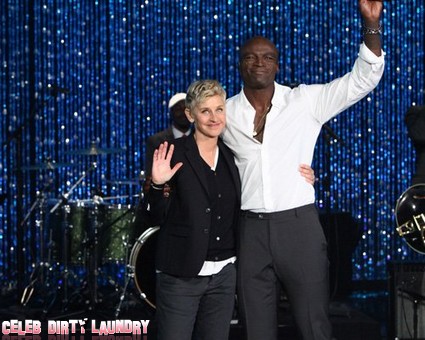 Seal has poured his heart out to Ellen DeGeneres less than 24 hours after announcing his split from Heidi Klum. The British singer taped an appearance on her talk show yesterday which will air today. He opened up about his failed marriage, the divorce and his four kids.

You could say Ellen just landed the celebrity scoop of the year. The 48 year old had been scheduled to appear to promote his new CD but when his personal life hit the headlines it was assumed he’d bail. No one was more surprised then Ellen herself that he showed up and was willing to open up about the superstar split that has shocked the world.

So what did he say about the break up? ‘I think we were shocked. You go into these things with the greatest intentions when you say ‘I do’ and you say ’til death do us part.’ Those vows hold value. They are not just words… You try and you work through it and the thing that you quickly realize when you are married and you become a parent you do the best that you can‘.

There was no bitterness – just praise for his soon to be ex wife ‘The thing that I’m most proud about this great woman who I married (and I really do mean that from the bottom of my heart), is that together she has given me four incredible gifts…four beautiful children. She is still, in my opinion, the most wonderful woman in the world. I think our priority was to remain civil and do this thing with dignity. We still very much love each other. To say that neither of us were grieving would be an out and out lie (and I don’t mind telling you that)‘. Very candid!

So what about his wedding band? ‘Yes, I am still wearing my ring. I think it’s just pretty much a token of how I feel about this woman. We have eight years. Eight wonderful years together. Just because we have decided to separate doesn’t necessarily mean you take off your ring and you’re no longer connected to that person. We will be connected in many ways ‘til the rest of our lives…. though our children and also through this tremendous admiration, respect and love that we have for each other’.