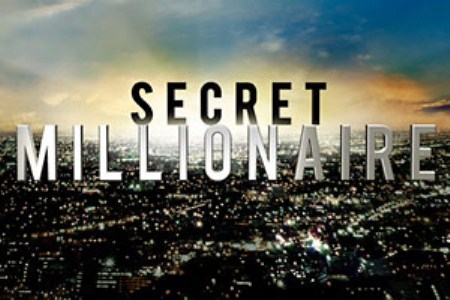 Tonight Secret Millionaire returns with an all new season following successful business people who will be giving away hundreds of thousands of dollars for one week when they leave behind their lavish lifestyles and conceal their real identities to volunteer in some very poor and dangerous communities throughout America. Stand by as we live blog the episode with all the details.

This season, we are thrilled to know that Grammy award winning actor Blair Underwood will be narrating the show. Our favourite Blair performance was in “Dirty Sexy Money” but a lot of people know him for his performances in “L.A. Law”.

On tonight’s episode, millionaire and world-renowned artist Scott Jacobs and his sheltered 18-year-old daughter, Alexa Jacobs, leave behind their family and lavish lifestyle in San Diego to spend six days in Newark, New Jersey – an American city in need – to search for those most in need of financial help.

While there, father and daughter will attempt to survive on less than $75 during their week-long visit, while volunteering their time to worthy charitable organizations and searching their hearts to determine how much of their own fortune to gift the community heroes they meet

We will be live blogging Secret Millionaire tonight with all the up-to-the-minute details at 8PM EST so make sure to come back to this spot and watch the show with us. Refresh your computer often to get the most up-to-date results! While you wait for the recap you can check out a sneak peek video and some spoilers for tonight’s episode HERE.

RECAP: Scott and Alexa will be cut off from their families, they have to leave behind their cell phones and credit cards and they don’t even know where they are going.

They arrive in Newark, NJ and Scott points out the projects to Alexa in the cab after leaving the airport. The cab driver tells them that no kids live there anymore because they are afraid to get shot.
In their temporary home, Alexa is completely grossed out. The two have to survive on $70.00 for the week and their mission is to find people who might need assistance.

The two go out under cover, they tell one guy that they are filming a documentary as a cover up. Boarded houses, people homeless in the streets; it’s not what these two are comfortable with. Alexa has only been there for an hour and she is heart broken because she wants to help.

It is the second day undercover and Alexa is exhausted, she had a bad sleep on the couch. They met a guy on the street that referred them to IYO, a youth organization. IYO was founded by Mrs. Wallace and her late husband 40 years ago, she wants to help kids to get a job and stay out of jail.

Mrs. Wallace gives them a look around, there are children in a learning environment, as long as they want to learn, they will help them. Alexa and Scott volunteer to help out, they are heading to the cemetery to clean it up. She first gives all the kids a pep talk before they head out.

While cleaning the grave yards, Alaexa talks to one of the boys, he has six siblings that he takes care of, he has been in the program for eight months.

Scott and Alexa have now found a lead for war heroes in need, they head to the G.I. Go Fund. The organization was founded six years ago when one of their friends was killed in Iraq. There is a midnight mission that they can help with, they go out and find homeless veterans and assist them. First, they go into a training session to help them cope with the veterans.

It’s before dawn on the third day, Scott and Alexa are with the team and nobody really knows that they are millionaires. They both find some homeless men and first ask them questions, Alexa enjoyed talking to Ray, who was homeless, and her father was overwhelmed to see how at ease she was.

Later that day, the two take a break and have a deserving cup of tea. When they are in the coffee shop, they find a card for “Glass Roots”, they help disadvantaged youths through art; they try to help kids turn their lives around and get on the right track.

Scott has a chance to talk to a kid who tells him that he has always lived on the streets and this program has really helped him.

Scott and Alexa are really touched when they talk to Seth’s mother regarding the G.I. Go fund which was started in his honor. Alexa was happy the homeless man who she helped, Ray, showed up for help at the G.I. Go fund when they were reaching out to the homeless veterans. Scott just finds this experience so overwhelming; he takes out his check book and wants to give them money right away because the need is immediate. The two get up in front of everyone at the G.I. Go fund and tell them they are so happy they found them. Scott then tells them that he is a millionaire and would like to give them a gift, $75,000.00. Everyone is overwhelmed and thrilled; Seth’s mother is crying and gives Scott a big hug.

It’s time to pack up their personal belongings, but first they have to go see Glass Roots. Scott tells them that they feel strongly, about this place; Chris said he would be on the street selling drugs if it wasn’t for them. He then goes on to tell them that he wants to give them a cheque for $20,000.00 to help with the kids.

Scott then tells Chris that he reminds him of himself, he goes on to tell him not to lose sight of his direction – he wants to be a mentor to him and never wants him to sell drugs again. Scott gives Chris $2500.00 to help him move forward.

Scott and Alexa head over to IYO and this time Alexa speaks, she tells them that they are really touched that Mrs. Wallace has been doing this for 40 years. Scott goes on to say that he is a multi millionaire and they have a cheque for $50,000.00. More hugs and tears, Mrs. Wallace is thrilled that she will be able to help more kids.

This week changed both Scott and Alexa, they feel that they are reborn and want this to continue for the rest of their life.