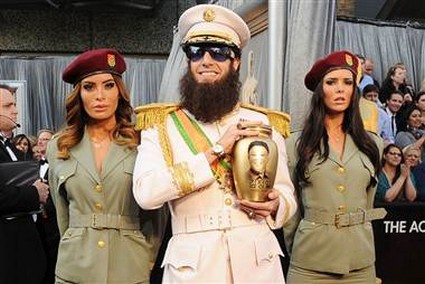 Sacha Baron Cohen got his revenge tonight on the Oscar’s red carpet! As promised, the actor walked the red carpet in character as General Aldeen from his upcoming movie “The Dictator.” However, when Ryan Seacrest stopped him to ask “who are you wearing” Cohen exacted his revenge for his reported banning by spilling ashes all over the E! and American Idol Host!

Flanked by two sexy female guards, Cohen was carrying an urn that he claimed contained the ashes of former North Korean dictator, Kim Jong-Il. When Seacrest stopped him for an interview on the red carpet and asked him about the urn, Cohen replied, “It gave me an opportunity to bring my dear friend and doubles tennis partner, Kim Jong Il. It was his dream to come to the Oscars and be sprinkled over the red carpet and Halle Berry’s chest again,” As he made the joke about Halle Berry—who luckily has a foot injury and wont be at the award show—he hoisted the urn and “accidentally” stumbled, spilling the contents of all over Seacrest’s Burberry tux!

Always one for putting on a smile, Seacrest laughed it off while Cohen quipped, “We need to clean this up!” the actor yelled. “But if someone asks you what you are wearing, say Kim Jong Il!”

Cohen was originally invited to the Oscars for participating in the best picture nominee “Hugo.” However, when rumors spread that he would be using the show to promote his upcoming comedy and would be appearing in character, producers for the Academy Awards revoked his invitation and banned him. Cohen then posted a video in character saying: “While I applaud the Academy for taking away my right to free speech, I warn you that if you do not lift your sanctions and give me my tickets back by 12 p.m. on Sunday, you will face unimaginable consequences.” The show’s producers eventually lifted the ban, but I guess Cohen—erm…the general—had a score to settle.

Meanwhile, Ryan Seacrest had to explain his dusty tux to every celeb he interviewed after Cohen! Too funny!

Check out the video below, this could turn out to be one of the best moments of the night!