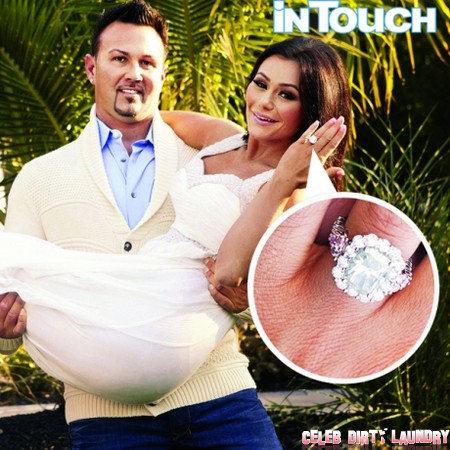 Here at Celeb Dirty Laundry we’ve heard rumblings of Jenni “JWoww” Farley’s engagement to 37-year-old Roger Matthews and while the duo kept the details kind of private for awhile now, they’ve finally decided to show off Jenni’s engagement bling. In an article in the latest issue of In Touch Weekly.

Roger says he spent a long time planning the proposal and worked with jeweler Layna Friedman to design the perfect ring for Jenni. It has a cushion-cut diamond that’s more than 5 carats surrounded by 2.5 carats of pink and white diamonds in a white-gold setting. Of course his fiancé was absolutely thrilled to receive it saying,

“It’s more than I ever expected. Roger’s not an average-looking guy, he’s huge: his personality, his size [6’4″]. So I always said, ‘I want my ring like you — big! The bigger the better!”

In case you wondered, Jenni confirms that her best pal, Nicole “Snooki” Polizzi will be by her side when she marries Roger. Jenni says that Snooki may have wanted her to be engaged even more than she hoped it would happen. That makes sense given that Snooki appears to have settled into domesticity rather well. She’s want her bestie to be as happy as she is!

Jenni and Roger have had an on again-off again relationship for years now. Do you think the off times have made them realize that they really do belong together for the long haul?  Will they actually make it down the aisle and better yet, will Snooki be a bridesmaid clad in animal print?  Tell us your thoughts in the comments below!