BY Rosh Garing on May 30, 2012 | Comments: one comment
Related : Justin Bieber, Selena Gomez 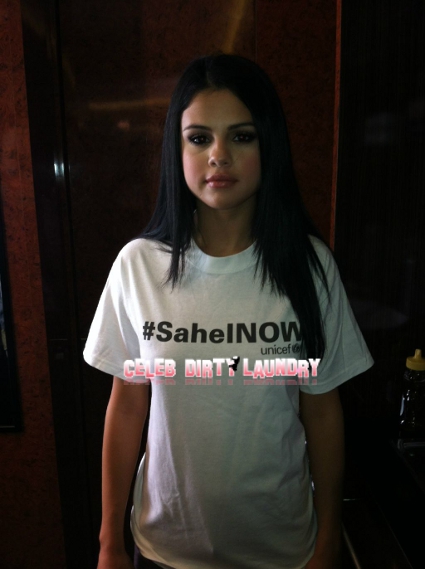 Selena Gomez recently sported a braless look on Twitter that has already gotten many reactions from fans, some of who have already deemed the starlet’s new fashion statement to be a little too daring.

The fearless singer, who happens to be Justin Bieber’s girlfriend, is back in the limelight with this very personal photo she recently posted on her Twitter account.

In the photo, Selena poses with her shirt — aiming to push for the support of the global foundation and organization UNICEF. However, she must have been trying to put it up as soon as possible because she clearly forgot to throw a bra on!

Well, she’s still making waves for her cause even with this controversial picture! Selena Gomez really has a good heart and her concern in promoting her advocacy groups is something that is hard to ignore. With her show of support with only her t-shirt on, she has helped the Sahel region of Africa which is currently suffering from a food and nutrition crisis affecting people of all ages, especially the children.

This is really a sweet showing from a big star like her. Hopefully, more celebrities will follow her lead in helping those who are struggling in Africa. But next time Selena, how about we put on a bra? It takes only a minute or two, and most people don’t find posting a braless photo on Twitter to be all that classy.

So, what do you think about her braless look? Share your sentiments! Feel free to comment! To see Selena in all her uncensored, braless glory, you find the original pic on her Twitter account.