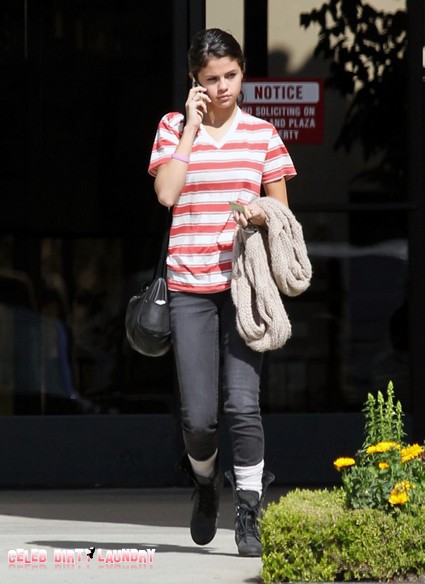 Selena Gomez spoke about her life as a student and revealed that she had a crush on a young man – and it wasn’t Justin Bieber! Of course that was then and this is now – and Selena and Justin couldn’t be more in love! In fact Selena explains that she didn’t have the confidence at that age to even approach the fellow.

Today Selena is probably the most popular female celeb of her generation and is adored by millions and fans – male and female – the world over. But there was a time when she was at school when Ms. Gomez might have been a bit of an ‘ugly duckling,’ so to speak. Selena says that she had only a couple of friends and lacked self-confidence.

Selena was candid in her interview saying that she had few friends and was shy and retiring:

‘I was never the popular kid at school.  I had two friends, but I just sat at the back of the room and got on with my work.  School is such an awkward time in your life. I was never confident in school.”

Selena thinks that she wasn’t bullied primarily because her cousin was the captain of the cheerleading team. That gave Selena at least a little bit of vicarious respect.

Selena said:  ‘Nobody picked on me because my cousin was one of the popular gang.  She was always very protective of me, so I guess I was very lucky.’

Selena is now dating the most popular teen heartthrob in decades but she says that back in school she struck out:

“I never went out with guys at school.  I had a crush on a guy, but I never told him about it.  I did the thing that a lot of girls do: I avoided him!”

“You need that self confidence if you want to chat to the guy you like.  If you’re confident with yourself, and you’re okay with that, then you should go for it.”

Selena ended off with some comments about her current experience in the big bad world of entertainment:

“There’s a lot of rejection in this industry and it’s tough.  There are also a lot of obstacles that you have to go through and it can be really exhausting. But if you love it, then that’s all that matters.  You’ve got to go for it.  I still have people trying to bring me down, but I’m happy because I love what I do.  Ignore the cruel jibes and stick with the nice people.”

Selena Gomez is just about the nicest celeb you’d want to find. We hope that everything continues going well for her.