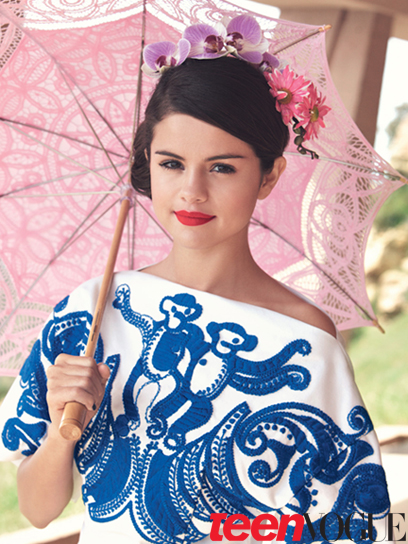 Selena Gomez says she doesn’t want to marry Justin Bieber — not yet anyway. The couple seems to be the symbol of pure puppy love. They’re spotted everywhere — at the kiddy park, at the ice cream parlor, at the Toys-R-Us megastore and most recently, Selena was spotted in Teen Vogue. She posed for the September cover issue. She revealed to the magazine, “It’s really fun. I’m lucky. I’m 20. I don’t take anything in my personal life too seriously. I have great friends and a solid group of people I love. I feel like everything else comes organically.” She also revealed that she’s not quite ready to take the big leap into marriage.

The magazine asked the tough question about Selena’s life, especially marriage, to which she responded, “Marriage and all that other stuff I think will happen once I feel accomplished in every other aspect of my life.” Thank you for the naivety, Selena, we’ll remember to tell our 81 year-old-grandma all about your life philosophy! How solid can your group of friends possibly be? They’re always outing your dirtiest laundry to tabloids.

Thank our fat cat that you’re not planning to get married anytime soon, because we cannot bear to endure a Selena Gomez/Justin Bieber marriage. Dude, chill your guava and focus on your career first, please? Bieber won’t be getting older anytime soon, for he will forever resemble a man-child.

Selena has been cast in Spring Breakers with Ashley Benson and Vanessa Hudgens, and the film has supposedly been described as being quite “racy.”  We seriously cannot imagine ourselves watching Spring Breakers. There’s nothing racy about Selena Gomez, nor is there any substance to her acting abilities.

In all fairness, it does take guts to be in a relationship with a man-child who resembles a mannequin with a fringe made in China Town. What do you think will happen with Justin and Selena — when’s the wedding? For more photos from Selena’s Teen Vogue cover shoot click here!