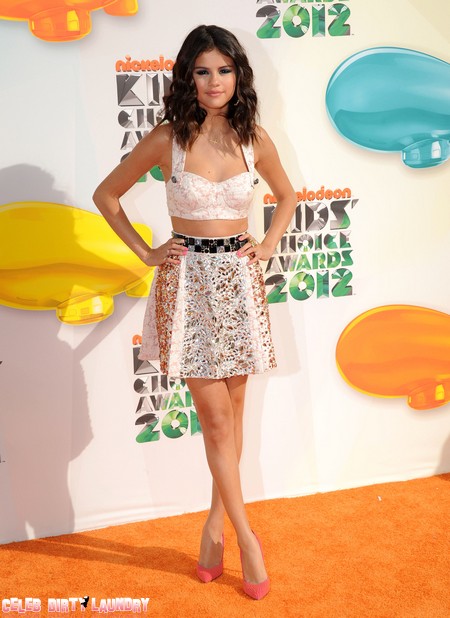 Everyone loves Selena Gomez – not just Justin Bieber – and so she was the big winner at the Nickelodeon Kids’ Choice Awards in Los Angeles for 2012.

The singer and actress took home two awards, one for Favourite TV Actress for the now defunct ‘Wizards of Waverly Place’ and a second gong for Favourite Female Singer at the ceremony in which over 220 million votes were cast.  Selena said:    “After no longer doing my show, knowing you guys still watch it means so much.”

Host Will Smith kicked off the night with a rap and promised a record-breaking amount of the slime for which the awards are famous, saying:  “No one is safe from the slime.”

Celebrities including Halle Berry, ‘Glee’s Chris Colfer and even Will and Justin Bieber were all covered in the sticky substance during the evening although one guest who managed to avoid it was First Lady Michelle Obama, as she presented Taylor Swift with the Big Help Award in recognition of her philanthropic efforts, including work with U.S. tornado and flood survivors and various youth-related charities.

Taylor said:  “I’m so honoured. I have always wanted to meet you; this is amazing. I am so honoured to be receiving this award from the first lady of the United States. I am freaking out. I’m really proud of all of you guys. I see you helping each other out. I think it’s important you know you are making a difference in this world.”

Katy Perry – who won an award for her work in ‘The Smurfs’ movie – was the first performer, singing ‘Part of Me’ and declared “The only reason I’m here today is because I’ve never grown up. I can’t wait to do ‘Smurfs 2.'”

Taylor Lautner took home the special blimp shaped award for Favourite Butt Kicker and was forced to complete 1,000 push-ups by host Will before also getting slimed.

Boyband One Direction performed ‘What Makes You Beautiful’ while Katy, Taylor and Selena proved they are fans of the five piece by dancing in the audience and singing along to all the words.

Did you enjoy the show?