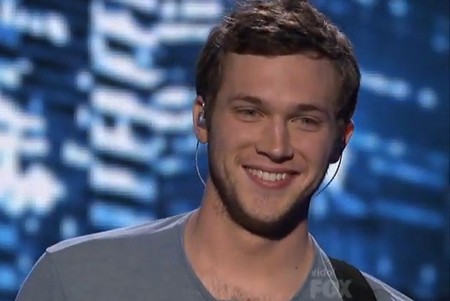 Phillips Phillips has severe kidney problems requiring immediate emergency surgery that could force the brave competitor out of the American Idol Final next week.  Last week when Phillip was back in Georgia his doctor was alarmed at his condition.

Phillip’s kidney problems have plagued him since the start of the show but now the situation has grown even worse.  A stent was inserted into the singer to provide some relief for Phillip’s  ailment but that temporary measure is no longer sufficient and surgery as soon as the competition concludes is a must.

If Phillip’s already marginal  health does not hold out for several more days he will have to withdraw from the competition and his dream of being the American Idol will be crushed.

Phillip Phillips — one of the finalists on “American Idol” — has been URGED by his personal doctor to get surgery immediately … but Phillip wants to work through the pain and the risk so he can win next week.

Multiple “Idol” sources tell us … when Phillip went back home to Georgia last Saturday … his family doctor spent almost the entire stay by his side and was alarmed by what he saw — Phillip wasn’t eating and looked horrible.

Phillip suffers from severe kidney problems and at the beginning of the competition it got so bad he had a stent put in as a temporary fix until he could have surgery. But the condition has worsened and Phillip’s doc told him he needed surgery now. Phillip said he was not going to drop out of the show so the doctor told him he ABSOLUTELY had to go under the knife immediately after the finale.

We’re told the recovery time for the surgery is at least 6 weeks.

Phillip’s condition is taking its toll — we’re told the medication causes dry mouth, and it’s had some impact on his singing.

Phillip has also missed some of the field productions that are shot for the show — including the Ford commercials. Our “Idol” sources tell us they felt that making him go on location for these shoots were just too taxing.

We hope Phillip does not have to withdraw.  Especially as after what we saw this week Phillip is the clear favorite to beat Jessica Sanchez and win.