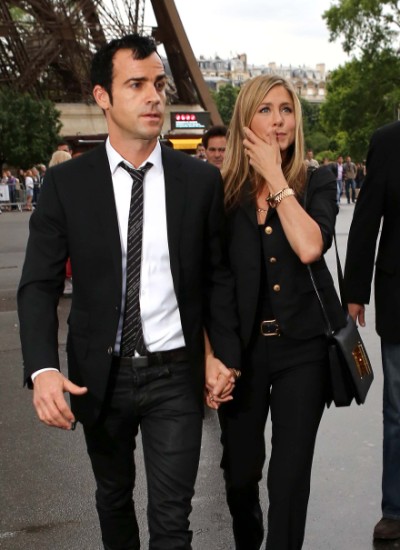 Jennifer Aniston and Justin Theroux are back from their whirlwind European vacation and doing better than ever because of all the great sex they had. Apparently Jennifer gushed to friends that the hot bumping and grinding “saved” them.

I’d believe that. Have you seen the abs Justin’s been sporting? Homeboy’s been in the gym and it’s paying off!

After their sexy rendezvous in Paris and then a romp through Rome, Jennifer and Justin peeled off to the steamy Italian island of Capri. A bikini-clad Jen, 43, and her hunky beau, 40, were spotted cavorting aboard a yacht there, sunbathing intimately close to one another and snapping pictures in their skimpy swimwear.

The couple’s European escape – which was prompted by a need to reignite the passion in their relationship following fights over where to live, whether to start a family and Justin’s friendliness with his ex – turned into a nonstop lovefest.

In Paris, “Jen and Justin stayed holed up in their suite for two days, doing nothering but making love,” an insider reveals. And in Capri “they took a private tour to the famed Blue Grotto and asked their guide to give them some private time… After Jen and Justin disappeared, the guides heard suspicious sounds and yelled, ‘Everything OK in there?'”

Seems like the duo are hot and heavy again! Says a friend: “Jen is gushing that sex saved her relationship with Justin.”

Have Justin and Jen even been together long enough to need saving? Does the sex start getting old after two years even when your Jennifer Aniston? Billy Bob Thornton’s the one who said sex with the most beautful woman in the world (Angelina Jolie) can suck, so I guess it’s possible.

Poor Jennifer. She can’t even go on vacation with her boyfriend without a magazine making her look desperate. Poor dumped Jen clings to boyfriend as he threatens to leave, but then sex saves! As much as she always appears a little baked and casual, she can’t seem to shake the clingy, whiny image she got saddled with after Brad Pitt kicked her to the curb. Will the marriage to Justin stop it? Do you think there’s even going to be a marriage? You better believe she’s hoping for it. And there’s evidence. She’s wearing a new ring and he puts up with the paparazzi, so he must want to be in it for the long haul. And Angelina Jolie is taken now so it’s not like she can steal him away… or can she?