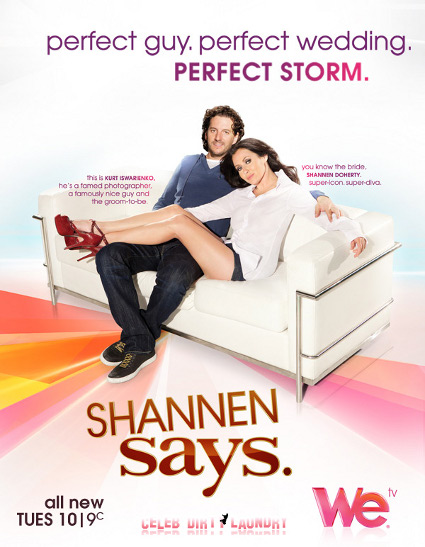 On last night’s episode of Shannen Says, Shannen Doherty got a taste of what it was like to have a child and met with her wedding planner . . . . The wedding’s coming, and everyone, including her third-groom-to-be Kurt Iswarienko, better watch out because this bridezilla just might breath fire.

For those who haven’t watched the show yet, take a look at the show’s official description to officially get acquainted with Shannen.

An international icon, a devoted daughter, a perfectionist and a bride-to-be (for the third time) – there’s more to Shannen Dohertythan tabloids have led you to believe. In the original series, Shannen Says, Shannen Doherty takes viewers on the bumpy and hilarious ride toward the altar with her fiancé, famed photographer Kurt Iswarienko. As if wedding preparations aren’t stressful enough, Shannen has only seven weeks to plan and pull off her big day. When the pressure becomes too much, Shannenenlists My Fair Wedding host David Tutera to help bring her vision to life. Pre-wedding jitters, a career-distracted groom, a trip to Prague, family turmoil and wardrobe malfunctions should be enough to make them pull the plug – but maybe love will conquer all, in Shannen Says.

Last night’s episode was full of drama — drama that should be watched instead of read. Because let’s face it: we all like watching some drama.


So who’s ready for next week? Don’t y’all need to see what becomes of this wedding and if Shannen successfully makes it to her third alter? You know what they say . . . . Third time’s a charm!


Will you tune in next week for Shannen Says? Let us know in the comments section below!

Media Credits to: WE