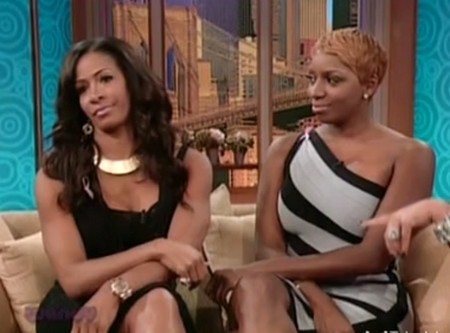 You will not believe this one guys!  The news is somewhat out about how much the Real Housewives of Atlanta’s salaries are, now that the season is done. When I said somewhat I meant the figures are not pinned down but what they were talking about were ballpark figures.  And let me tell you something I want to play in that ballpark.

Oh! I forgot and they all get bonus money for doing the reunions. This reality show is one of the highest paying.  It should be because it is one of the most watched shows on Bravo Network.  Listen I am not mad at any of them, get your dinero’s chica’s (money girls). The only one known to complain about her salary is Sheree.  Sheree is a little ticked off that Nene makes more money than she does – people love watching Nene, not you chica, and that’s why she gets more, really!

Listen Sheree, this season ended last Sunday and all you did through the whole season was throw whoever you could under the bus and start arguments with fellow cast mates.  Sheree did nothing but complain that she wasn’t getting child support from her ex-husband, a retired NFL athlete.  Sheree if you are getting anywhere close to the afore mentioned salary above sit down, be quiet and stop trying to relive the good ole married days when you had more money. Oh! Also get a job.

Nene does hostessing, is trying to open up a supper place, and has a recurring role on the TV show Glee. Kim is married to an athlete and has 3 children and 1 on the way. Kandi writes and produces songs as well as having a sex toy business.

Cynthia owns and operates her own modeling agency.  Phaedra is an attorney and is opening up her own funeral home.  Marlo (Oh Marlo) you Hm… we’re not sure what you do but you look absolutely fabulous doing it and you never complain about money.  Get it Sheree! That’s not a good look for you, not at all (no Ma’am). This season was a blast to watch – can’t wait for the reunion!!