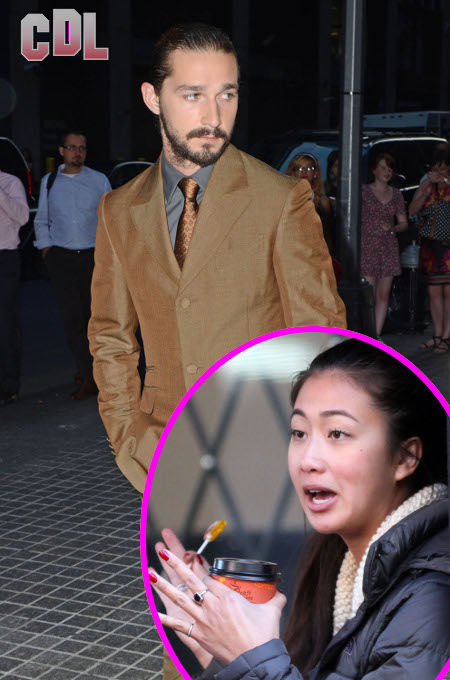 Shia LaBeouf may have just agreed to heat things up in Lars von Trier‘s new movie “Nymphomaniac” with some real sex, but it appears that things are getting a bit heated (not in the good kind of way) with girlfriend Karolyn Pho. Shia and Karolyn were photographed in LA the other day during what appears to be a fairly intense screaming match. We’re not sure who won the epic battle of words, but Karolyn, who is a fashion-designer-on-the-rise, says it was all just meaningless relationship banter. However, the argument is suspiciously close to Shia’s big reveal — that he’ll be venturing into a film that will require him to perform a real sex scene.

Of course, Karolyn denies the fact that she’s angry that her boyfriend is planning to have sex with another woman. But, I think we all know the real truth here: SHE BE MAD.

She told New York Daily News, “It’s none of anybody’s business. Everything is fine with us. It was nothing affiliated with his movie. We’re normal people who have normal lives.”

So do you believe that Karolyn is simply brushing off Shia’s news, or do you think his new role could lead to the end of this relationship? Sure, Shia is doing this role for the sake of his art, but he’s also in a relationship. And this potential intimacy probably doesn’t bode too well with Karolyn.

Discussing the role, Shia tells MTV: “[Von Trier] is very dangerous. He’s the most dangerous dude that I’ve ever showed up for. I’m terrified. I’m so terrified, which is why I have to go. We’ll see what happens. There’s a disclaimer at the top of the script that basically says we’re doing it for real. Everything that is illegal, we’ll shoot in blurred images. Other than that, everything is happening.”