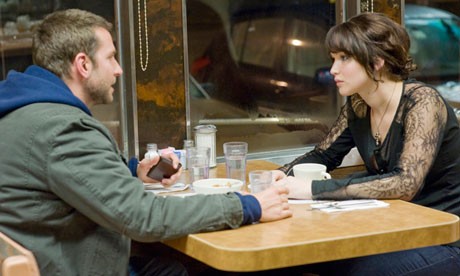 I went into the Silver Linings Playbook knowing I was going to like it. That’s not saying much. I also really, really like Twilight so my likes are not indicative of a great movie. Keira Knightley usually just has to show up in a corset and I’ve got a new favorite. Knowing that, I was determined to make SLP work for my love and it did. It worked its ass off.

I don’t want to spoil the movie for you so I’ll bare bones the plot. Bradley Cooper plays Pat, a bi-polar high school sub fresh off an eight month stint in a psychiatric hospital for nearly beating his wife’s lover to death. He comes home to live with his parents in an effort to turn his life around by getting skinny, only looking for the silver linings in things and, ultimately, reuniting with his estranged wife. Naturally, things aren’t as easy as all that. Because he refuses to take medications since they make him feel bloated (he’s trying to lose weight, remember) he encounters setback after setback while trying to acclimate with his friends and family played by the surprisingly good Robert De Niro and Jacki Weaver.

Enter Jennifer Lawrence. Jennifer plays Tiffany, a new widow, who uses Pat’s desperation to speak to his wife as a way to get him to enter a dancing competition with her. Pat’s wife has a restraining order out against him and Tiffany promises Pat she’ll pass a letter along if he’ll be her partner. Then there’s a lot of dancing and a lot of football talk and I’ll let you watch it to find out how it all ends.

And it’s worth it.  Bradley Cooper is usually hit or miss with me but this movie was clearly made for him. Bradley is amazing as the tortured, spastic, socially awkward guy who is just trying to keep it together long enough to convince his wife he’s changed. And the chemistry between him and Jennifer Lawrence is so much fun. Tiffany has problems too. Everyone in the movie does and it’s Pat and Tiffany’s problems that help them relate as everyone else is walking around denying that anything is wrong in their lives. Pat’s best friend feels stifled in his marriage and can’t tell his wife to stop spending money. Pat’s mom is an enabler, letting her husband bet all their money so he can realize a dream to open a restaurant that no one knows is really true or not and Pat’s dad, played by De Niro, is a hot-headed, OCD Eagles fan who might have been sent to a mental hospital thirty years ago like his son if times were different. It’s their self-awareness that bonds Tiffany and Pat though Pat needs Tiffany to push him in realizing that throughout the movie.

I was wary going in that a movie like this could house so many nominations. Lawrence, Cooper and De Niro have already been singled out numerous times and are hot contenders for an Oscar nom. But they deserve it. Lawrence continues to show that she’s the best actress of her generation – not one of, but the best. She carries the movie just as she carries Pat down his road to salvation. She’s funny and sweet, ballsy and domineering and all that plays out within minutes on her face.

The other surprising highlight for me was De Niro. It’s so easy for De Niro to phone it in – and he has – but he really made something happen here. He could have just played the bumbling old guy who likes to watch his football and have all his remote controls in line so as not to disturb the football “juju” but he brought a vulnerability that I’m not sure anyone else could have portrayed. Say what you want about the tough guy, Scorsese muse but no one does vulnerable like De Niro. There’s a scene (and you’ll know it when you see it) when he’s just wrecked and breaking down and you remember how well De Niro falls apart in movies. It’s This Boy’s Life good, with a touch of disturbing. He does it so well that you have to remind yourself that SLP is a serious movie about serious problems and not just a feel good comedy. That’s what makes the movie so interesting and exciting to watch.

Cooper holds his own against De Niro in their second movie together but I have a feeling this movie (over Limitless) will have a much greater impact on the kinds of roles he’s offered in the future. If I have one regret it’s that Lawrence didn’t get to share more screen time with De Niro. When they do, it’s pretty great. There’s no backing down on Lawrence’s part and she matches De Niro’s trademark Jimmy Conway stare with only the impudence a 22-year-old actress can.

So there’s my Silver Linings Playbook review. As you can tell, I strongly encourage checking this movie out. These reviews are something new we’re doing at CDL. Tell us what you think and come back for more!