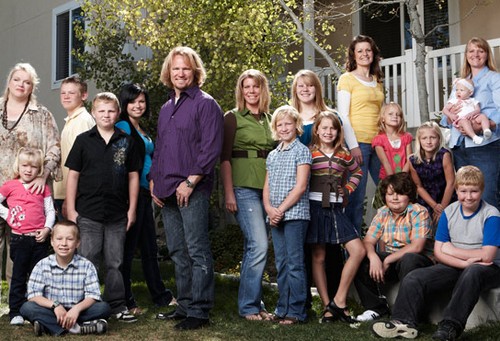 Tonight on TLC a new episode of SISTER WIVES airs called “Mourning the Loss.” If you have never watch this show you will meet Kody Brown, his four wives — Meri, Janelle, Christine and Robyn –and their 17 children! We get to follow the Brown family and see how they attempt to navigate life as a normal family in a society that shuns their polygamist lifestyle.

On last week’s show the Brown teens did volunteer work for a group that helps people who are in dangerous polygamist situations.  If you missed the episode you can read a full and detailed recap here!

On tonight’s show tensions rise as the Sister Wives fight for the bonus features they want for each house. Who stays in budget and who goes way over?  Will the sister wives pull together or pull further apart?  The Brown family have been in Las Vegas for the past year and it has been hard on the family.

Later, the Brown family digs deep when the family pet is ailing. A compromise leaves them all in tears.  After stressing out over finances, the wives try hard to start a web business, and Christine makes another attempt to pass her real estate exam.

We will be live blogging the episode with all the up-to-the-minute details at 9:00pm so make sure to come back to this spot and watch the show with us. Make sure to refresh often so you get the most current info!  While you wait for the recap, check out the sneak peek of tonight’s episode, below!

Kody and Meri had an appointment to do design on the interior of the home. Kody says Meri won’t make a paper or rock decision. Meri said that they’re going to be living with this change for a long time which made it stressful. Kody just wants a decision to be made while Christine jokes that they can always visits the others house. Janelle is worried about the budget.  Meri does not want a sliding door. She feels she has come under fire over their financial situation. Kody says she won’t have much children traffic. Meri knows she only knows she only has one child but she is putting the equal work of her sister wives. She sas they’re all trying to work through their emotions and make things work. Kody says they need to maintain their credit.

Drake, the dog, has been again. Meri says they will have to make the decision to put him down. Drake is 12 and they have a lot of kids under 12 and they’ve never known not having kids. Mariah wants to live in denial. Meri feels like she’s being cold hearted by wanting to put Drake down. Kody thinks Meri is basing her indecision on Mariah’s emotions. It is hard for him to understand why Mariah is struggling so much with the decision. Meri wanted all the kids to come over and let them know. Meri tells the kids that Drake is old. She needs to take him to Utah and he’s not coming back. Some of the kids start crying. The kids take pictures with Drake as part of their closure.

Janelle is still struggling with her weight. She has only lost 10 pounds as she is a big stress eater. She has been working with her new trainer, Shawn. Robyn is in love with Janelle’s schedule. She has watched her kids become couch potatoes and that has spurred her to become more active. She says it’s a constant battle everyday but she wants to be at 170 pounds—100 pounds away from her current weight.

Kody says the Utah prosecutors have dropped charges against them so he feels it’s safe for them to go back. He never really got a chance to say goodbye to their home in Utah and Meri needed his moral support in putting down Drake.

Meri’s sister, Rebecca, and her husband live in their former home in Utah. Meri says it seems so far away now but there are so memories attached. Kody is digging the grave as a way of mourning. He starts to get emotional and says it’s very depressing and not just because of Drake but of all the memories of his kids. He said it hit him while in the background that he never said goodbye to his home.

The vet comes to check on Drake and says he is suffering but Meri is still conflicted. Kody says they only have one choice. Kody says the entire experience was closure and goodbye. He is glad that they have moved to purchasing their four homes in Las Vegas. He hopes they can create the same experience in Vegas.

Christine is upset that she failed the real estate test. She doesn’t have a quiet place to study as she’s caring for her toddler. She doesn’t want to be a failure.

Kody and the wives take the kids to the construction of their home.  Robyn says it’s been a long time since she felt someplace was their permanent home. Kody makes a toast to them finally being able to live side by side again.

Christine and Kody are supporting Mykelti who wants to be a designer. They take her to a center where she works with a professional, Jennifer. Kody left before the models started taking off her clothes. Robyn is proud that Kody is a gentleman who chose not to look at a woman designing.

Christine got a 71% on her practice exam, 4 points under passing. She really doesn’t want to fail again after studying so much.  She says they moved their family to Vegas with all these promises but the families are in four separate houses. She says her relationship with her Sister Wives is dwindling and not as strong as it used to be.

Robyn is launching ‘MySisterwifesCloset’, an online boutique. Meri says they decided to do it as a family business because it was financially better to do. After the site launches, they all become nervous when there are no orders. Meri expected a flurry of orders but instead receives comments about the prices being too high. Ultimately, they do 28 orders. Kody does not want this business to flop because they have kids they have to send to college and to pay for their homes.

Christine feels like the family has failed because they’re all leading separate lives. She wanted the help of the other ladies to help raise her kids but she feels like she is doing it on her own. Kody tells the other wives that Christine’s energy is low. Janelle doesn’t know if Christine will pass. Robyn is nervous now. Christine is happy to announce that she passed the test! She is now looking forward to selling her first house and using the check to help contribute. Christine tells the other wives that they have not been a supportive system and that it is frightening. Meri says they have to continue to work on it and that it is not a failure.