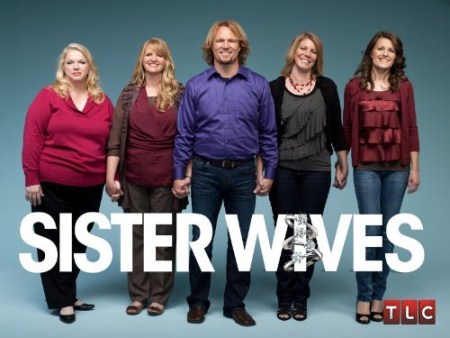 A new episode of TLC’s hit show Sister Wives airs tonight titled “4 Wives, 4 Valentines”. Stand by as we cover the episode with all the up-to-the-minute details.

Have you been watching Sister Wives? The show is about Advertising salesman, 42, Kody Brown, his four wives; Meri, Janelle, Christine and Robyn and their 16 children. Basically the Browns are just a normal family trying to live a society that shuns their polygamist lifestyle.

In tonight’s episode, it’s the most awkward day of the year for a Plygamist family, Valentine’s Day! Now, you might be wondering how the Brown’s handle monogamy’s biggest holiday of love? This year, Kody takes his young daughters to a daddy-daughter Valentine’s dance at their school and he got four different bouquets for his four women.

Last week the family was cleared of any wrongdoing and bigamy charges won’t be filed against them by the state of Utah. The family has been living in Las Vegas and are thrilled with the news: “We have spent years under investigation and ultimately had to move from the state of Utah to protect our family and particularly our children, we are delighted by the news that the prosecutors have formally declared that the investigation of our family is at an end.”

We will be live blogging the episode with all the up-to-the-minute details at 9:30pm so make sure to come back to this spot and watch the show with us. Make sure to refresh often so you get the most current info!

RECAP: A few months ago Robyn offered to be a surrogate mother for Meri and Kody who are now at their second visit to a fertility specialist.

The elementary school is having a Valentine dance, the girls want Kody to go with them and one of them invites big brother Logan.

Meri goes over to Robyn’s house as the girls are getting ready for the dance. Meri doesn’t feel like one of the mothers, she feel like she is just a visitor in the other wives’ homes.

This is the reason why Kody is pushing for the new property, he wants everyone close together. Logan and Kody are all dressed up and walk down the red carpet with the girls. Everyone has a great time dancing and Kody is thrilled that nobody cares how he dances.

Kody heads to the florist, to find four bouquets for his four wives.

This is the reason why Kody is pushing for the new property, he wants everyone close together. Logan and Kody are all dressed up and walk down the red carpet with the girls. Everyone has a great time dancing and Kody is thrilled that nobody cares how he dances.

Kody heads to the florist, to find four bouquets for his four wives.

The women all get together to plan their family Valentine tradition. Robyn has an idea that they decorate his car, Christine wants balloons.

Robyn is heading over to Christine’s house to try and borrow Kody’s car, she tells him that one of her tires are flat and he want to get the air compressor. Robyn is so quick out of that house that she manages to run out with the keys and everyone decorates the car.

Now Robyn heads back to Christine’s house and Tells Kody that she’s really sorry about his car and hands him the keys. When Kody gets outside, his whole car is decorated and all the kids are happy. Kody is thrilled with the surprise

Later that day, the family all get together for their party and Kody gives all his wives the bouquets that he got for them.

Kody announces to everyone that they are meeting with Tanya, the loan officer, tomorrow and they will finally find out if they are getting the houses.

It’s time for the meeting; Tanya tells them that she has some financing available. It will not be traditional financing; there will be a down payment needed for the loan 40% for each property. The wives are heartbroken, the dream is broken. Tanya goes on to tell them that one of the houses has already been sold.

Kody, wants them to just move on, this is just not going to work for them. Later in the day, Kody explains to all the children that one of the houses has already been sold, but this is not the end of it.