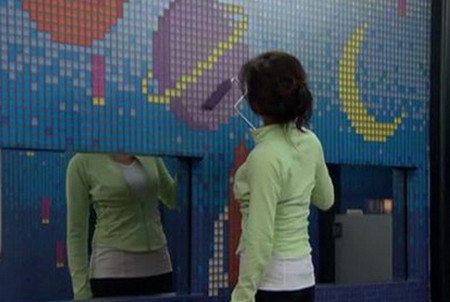 Big Brother 14 is less than two weeks away, are you excited? The premiere episode airs on Thursday, July 12th at 9pm and host Julie Chen gave us a glimpse of the inside of the house on her show, The Talk.

If the tiles on the wall are any indication, the theme this year could be space. If so, will there be a Buzz Lightyear room?  The first media photos of inside the house were supposed to be released on Monday night, but they have leaked on the internet and you can see them HERE.

There are fourteen spots on the House Guest board, so I think we can pretty much believe that there will be 14 house guests, but what about the rumour about there being four “mentor” veterans?

Well, I for one hope the rumours are true and I would love to see Evil Dick or Rachel Reilly return. Rumour has it that it actually is Rachel, Janelle Pierzina, Mike “Boogie” Malin and Dan Gheesling. The mentors will apparently get to choose the people they want to mentor and will be paid $20,000.00 for their services. And, the mentor gets to stay in the house as long as the person they are mentoring is not voted out. The mentors also have a chance to win $100,000.00,that is of course if the house guest they are mentoring wins the grand prize. These mentors are some of the best players in Big Brother history, are you looking forward to seeing what they bring to Big Brother 14?

On Monday, all of us “die hard” Big Brother fans will get to see the official cast, although the spoiler photos gives you pretty good idea of what to expect.

CBS has released two promos and while they are not that exciting, at least it gets us fuelled up with a little reminder on how much we love the show. Don’t forget to come right back here to Celeb Dirty Laundry for full coverage of the whole 14th season of Big Brother beginning on July 12th at 9:00pm.