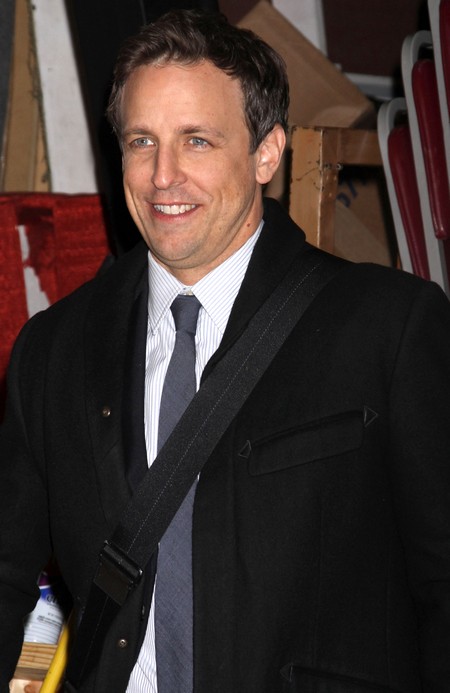 While there have been a few names tossed around as of late as to who might be filling Regis Philbin’s shoes as co-host to join Kelly Ripa on Live With Kelly!, comedian and Saturday Night Live vet Seth Meyers is said to be the front runner.

Regis retired from the show last November, and while he can never really be ‘replaced’, Kelly has had her fair share of celebrities vying for the position. And the show’s ratings only prove that Kelly is fairing okay without the ol’ Reg beside her.

Aside from Seth, former New York Giants star Michael Strahan and singer Josh Groban are also fan favorites. I wouldn’t think that a former football star would work, but I’ve actually watched Michael co-host with Kelly and let me tell you – the pair are great together! The man possess’ the right amount of whit and charm and the chemistry between him and the always-hilarious Kelly is undeniable.

As for Josh, I can’t say I’ve seen him in the chair, but from what I hear he always is a favorite among the audiences. So who is your pick? I’m on the fence, but this upcoming week will give us some good insight as Seth will be co-hosting with Kelly all week starting Monday.

We’ve waited this long for an official announcement, and it looks like we’ll have to wait a little while longer. In the mean time I’ve definitely enjoyed the array of hosts and watching all the different personalities and dynamics. I can’t help but wondering though, whom would Regis pick for Kelly?